The Artifact Hunters is a story about magic and is set in Scotland so naturally I wanted to include aspects of Celtic mythology and history.

In Scottish mythology, the Realm of Faerie is inhabited by two types of fae: the “good” and the “wicked”. The good faeries are members of the Seelie Court, and generally get along with humans, playing pranks but also acting in helpful fashion. The Seelie behave in a fun-loving or “silly” way (the word silly is derived from the same root as Seelie). 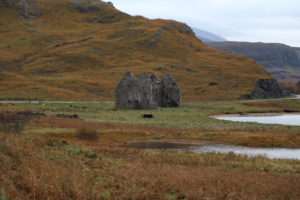 But the Unseelie Court is made up of malevolent fae who are also known as the sluagh, or the Host. The Unseelie fae are cruel, and at their worst they steal the souls of unwary humans. Humans are cautioned against speaking their true name (sluagh) aloud, especially in the dark, lest the creatures think they are being summoned.

The Celtic regions are rich with tales of magical creatures, who can be either benign or wicked, and who inhabit every glen, burn, croft, or cave. In Scotland, many of the supernatural beings are associated with water, which makes sense given Scotland’s many streams (burns), lakes (lochs), and its rugged coastline and rough seas.

The Ring of Brodgar 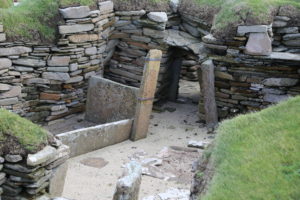 The Orkney Islands lie off the northern edge of Scotland, between the Atlantic Ocean and the North Sea. Windswept and barren but fertile, they were inhabited as long as 5000 years ago by a people capable of building complex structures for both housing and worship. Sophisticated stone houses in a village inside massive stone walls lie near ritual sites of standing stones that are similar to the more well-known Stonehenge in England.

A testament to the astonishing craft skills of these early peoples is that the standing stones, as well as residential and ceremonial structures like Maes Howe and Skara Brae, remain today. The Ring of Brodgar is only one of these sites, with a ring of stones that stand as tall as 15 feet. Nearby, the Stones of Stenness rise to a height of 19 feet. The culture and civilization – and their disappearance – remain a mystery, but active excavations reveal more every year.

You can see an image that I took of the Ring of Brodgar on my Rookskill Castle website. Scroll to the bottom of the page.

One Response to “The Scottish Celts: The Faerie Courts and The Ring of Brodgar”