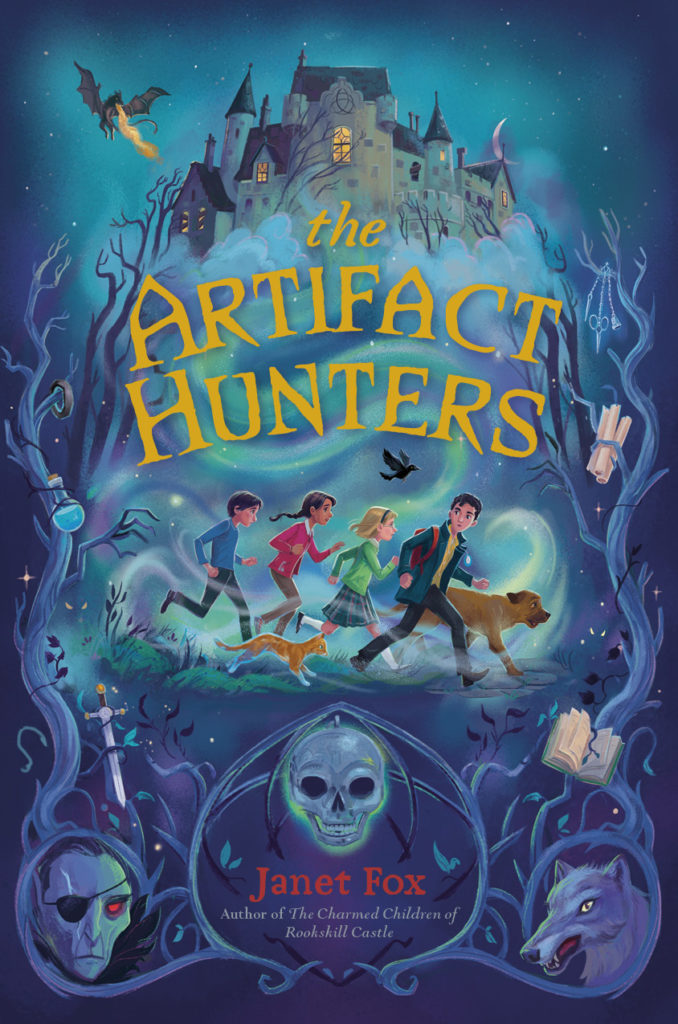 A Standard-aligned Educators Guide For Grades 5-6

For fans of THE CHARMED CHILDREN OF ROOKSKILL CASTLE, who have asked for a sequel…coming from Viking Children’s in August 2020, a companion book: THE ARTIFACT HUNTERS. In the words of my editor, Aneeka Kalia:

“Indiana Jones-style treasure-hunting through eras of the past to defeat the greatest evil the world has ever seen.”

Isaac Wolf can travel through time. But he’s also in a race against it.

With tensions in Prague rising at the height of World War II, Isaac Wolf is forced to leave home with nothing more than a small backpack and a pendant in the shape of an eternity knot. His parents believe the pendant will keep him safe–if he can discover what it really means.

This clue leads him to Rookskill Castle, home of the Special Alternative Intelligence Unit where gifted children can learn to harness their powers to support the Allies’ cause. With the help of his new friends and an antique watch that allows him to travel through time, Isaac must unlock his own powers and uncover the true meaning of the eternity knot. The only way he can do that, though, is by hunting for a series of magical artifacts that are scattered throughout the past . . . and Isaac isn’t the only artifact hunter. Soon he finds himself in a race against a threat just as deadly as the war itself–one that his parents had been trying to shield him from all along.

“What does this mean, a magical artifact?” Isaac asked.

“An artifact is an old object, of any kind,” Amelie said. “Jewelry. A sword. A mirror. A potion. But a magical artifact is infused with power. Some of the stuff of legends, like, you know, Excalibur. Or Aladdin’s lamp with the genie inside or the Chinese emperor’s nightingale. Other objects may have magic but no stories about them. Yet.” She paused. “A magical artifact can be just about anything.”

Isaac will have to discover his own path, while battling his fears, for…

“We may all be monsters under the skin.”

Check out the trailer!

“Potent, otherworldly, evil magic seeks domination, feeding on terror and upheaval in a time of war, while a Jewish refugee must find a way to counter it with some good magic of his own… Episodes are detailed and fast-paced, each one moving the tale forward, and there are lots of unexpected twists, turns, and revelations. Isaac and his magical teammates…are steadfast, brave, earnest, and altogether engaging. Inventive and exciting, with strong hints of more to follow.” Kirkus Reviews

“A companion novel to The Charmed Children of Rookskill Castle (2016), this is a joyful middle-grade adventure set against the backdrop of WWII. Isaac and the other “charmed children” are curious types, and it’s easy to root for them against the scary creatures of the night.” Booklist

“This fast-paced fantasy will appeal to fans of Carlos Hernandez’s “Sal and Gabi” series. A strongly recommended purchase where adventurous fantasy is popular.” School Library Journal

“Grabbed my attention from page one and would not let go.”  Jennifer A. Nielsen, New York Times and USA Today bestselling author of The False Prince

“An intricately woven tale, full of action, menace, and historical twists, Janet Fox reminds readers that friendship can overcome even the most powerful of evils.” Kim Ventrella, author of Skeleton Tree

“Ancient magic, shapeshifting and time-travel collide in this rousing story, all set against the backdrop of World War II Scotland. Janet Fox taps into her superior story-telling skills. With masterful artistry, she has given us another spine-tingler, complete with dire-wolves, wraiths, and a vindictive fae that will haunt your dreams for the rest of your days.” Kathi Appelt, author of Newbery Honor book The Underneath

“I am a big fan of The Charmed Children of Rookskill Castle, and this companion novel does not disappoint. The Artifact Hunters is a gripping, magical page-turner that will have readers rooting for Isaac Wolf as his life is upended and he’s thrust into a new situation, entirely on his own, while being pursued by a terrifying monster for reasons he doesn’t understand. Set against a backdrop of World War II, this artful blend of history and fantasy has it all: Treasure hunts! Time travel! Camaraderie in the face of extreme challenges! Janet Fox has delivered another suspenseful, magical adventure.” Jennifer Chambliss Bertman, New York Times bestselling author of Book Scavenger