A couple of weeks ago I addressed plot, and how the Save The Cat template is useful for sketching out the bones of a story. But there’s more to this idea of creating a skeleton, for stories (with the exception of metafiction) share a common structure.

This structure is based upon the concept of turning points, which is, in turn, based upon that human experience called life.

What Are Turning Points?

Turning points are places in a plot where the action “turns” due to something the character does (or fails to do). That turn is sharp, and completely opposite what is expected. For example, when in The Hunger Games Katniss’s sister Prim is chosen for Tribute, and Katniss jumps in and volunteers in order to save Prim, that moment in chapter 1 is the first turning point in the story.

Two things happen at any turning point. First, tension increases due to the 180 degree change in direction of the plot. Second, the turning point exists because of what the main character does (or fails to do), and her action will lead to what happens next.

The first turning point in any story is usually called the inciting incident. Each of the subsequent turning points in a plot have been given various names bestowed on those spots by various authors of story craft, names such as plot point one, midpoint, plot point two, and so on. Regardless of what they are named, these turning points do align, as you can see from my plot paradigm compilation here. 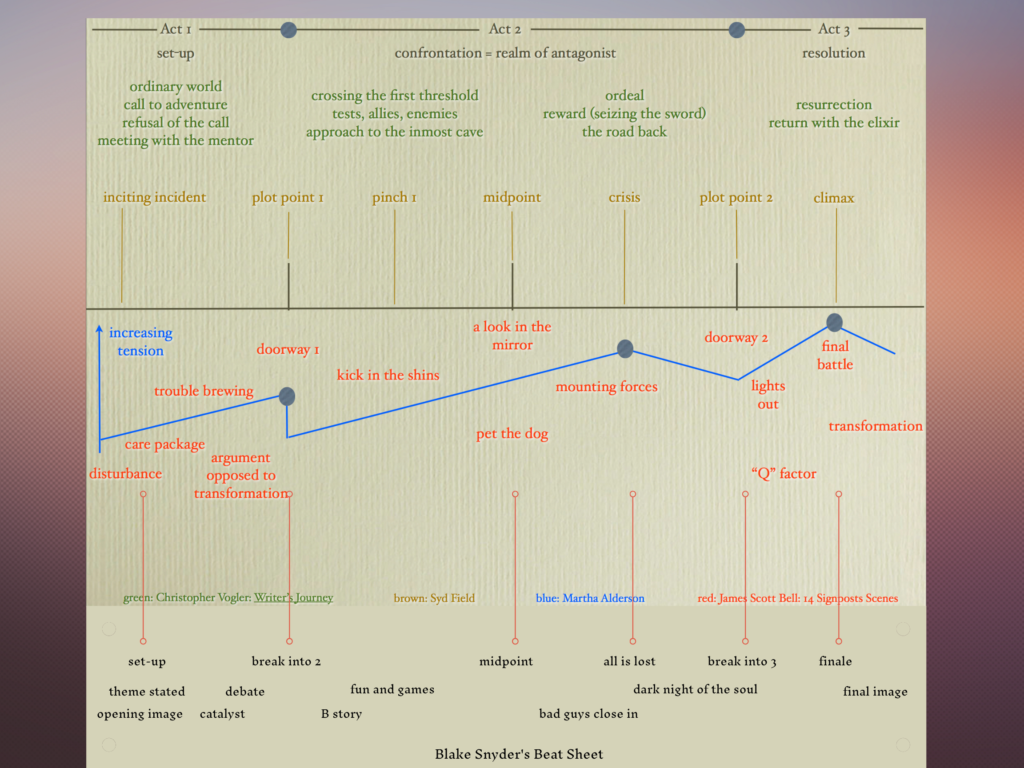 Aristotle was the first writer to name the points of a story, and his simple 3-act structure forms the basis for all the rest. In 1863, Gustav Freytag created a paradigm that looks like a pyramid, with the climax forming the top of the pyramid. Christopher Vogler created the “hero’s journey” paradigm, which takes the shape of a circle. Martha Alderson created a paradigm that adds the value of rising tension to the linear changes of the three act structure. And Blake Snyder broke the structure down into finer turning points in Save The Cat.

The most interesting thing about turning points is that they reveal that story structure is ingrained in the human subconscious. Our lives are made up of turning points based on our personal choices in the moment. In story-telling, the author makes use of turning points to focus on how often a small decision, made in an instant, can change the course of a life or many lives.

The Importance of Turning Points

Why do we need to understand turning points? Because they define a moment of real change.

Stories do not bump along in “this happened and then this happened” fashion. When they do, we stop reading. If you want to use turning points consciously, find a paradigm that you like and use it. Not religiously – there’s no need for something to happen on page xx, exactly. But if, after your first draft, you can identify those moments when your character does something that changes everything that follows, see if those moments align more or less with the story structure defined in the pattern illustrated here.

And if your character is missing a turning point, you’ll add both tension and a causal trajectory to your story by creating that turning point scene.

I’ve used almost every paradigm I mentioned, but my current favorite is Save The Cat. What’s your favorite paradigm, or which would you like to try?