Here we are, on this magical, mysterious day to celebrate the launch of…(drumroll)…DAYBREAK ON RAVEN ISLAND by Fleur Bradley! Look at all these guests! And all this glitter! Golly!

I’m making my way now to the talented Fleur for an interview. Fleur, oh, Fleur! Hi there! I hope you’ll let me ask you a few questions, starting with this one… 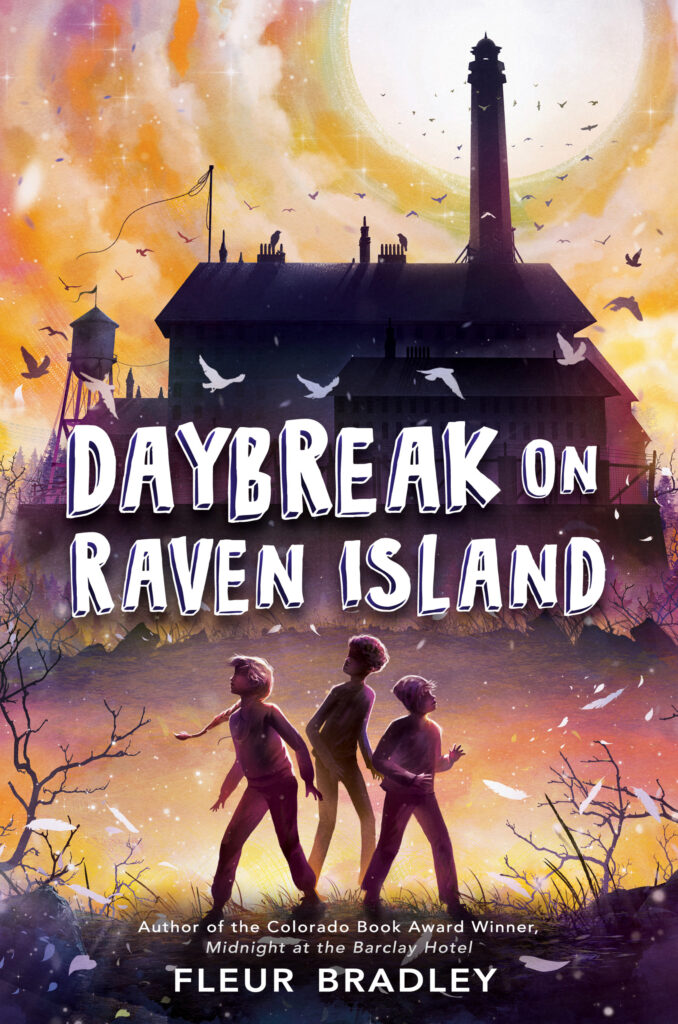 This party venue is perfect! Tell us why you chose it.

You know, there’s nothing like an abandoned prison and a flock of ravens to set the mood… Also, there are always plenty of ghosts—er, guests to make for a hoppin’ party without having to send out invitations. They just show up.

You look fantastic. Who are you wearing?

Thanks! I decided to wear my best cargo pants, so I have plenty of room for flashlights, skeleton keys to mysterious locked doors, and my phone of course.

Spectacular, and I love the feathers sticking out from the pockets! I see all the yummy goodies over there. What kinds of treats are you serving?

It’s been a challenge to get good food to Raven Island, but I made the best of it. There’s some canned soup and day-old bread for dinner, and I think there might be a random energy bar floating around. Of course I did bring cupcakes. It’s no party until there’s cake…

Now, of course, every party must have a theme. How would you describe yours?

I would say it’s Alfred Hitchcock meets the Twilight Zone… Watch out! The ravens come swooping down sometimes, especially when you’re trying to eat a cupcake. There’s a raven leader named Poe; watch out for her.

Ooo, Poe. The master of Ravenhood. Now for party favors! What are you giving away?

There’s a whole ring of old skeleton keys—Tori, Marvin and Noah tell me they unlock the secret to Raven Island. You can take one, if you think you can survive the night on Raven Island. There’s also an old diary that holds a lot of secrets to a prison break long ago, but I wouldn’t touch that if I were you.

Tori is all about playing soccer, but there’s no soccer ball to be found. She’s a little cranky about that. We’re playing ‘run from the ghosts,’ ‘duck from the ravens,’ and ‘what does that key unlock?’

Seriously, now, give us the skinny on your book. All the bells and whistles.

All kidding aside (that was pretty fun, though), here’s the book jacket description of Daybreak on Raven Island. It’s out on August 23rd, and I hope you’ll consider reading it!

From the critically acclaimed author of Midnight at the Barclay Hotel comes a thrilling new middle grade mystery novel inspired by Alcatraz Prison.

Tori, Marvin, and Noah would rather be anywhere else than on the seventh-grade class field trip to Raven Island prison. Tori would rather be on the soccer field, but her bad grades have benched her until further notice; Marvin would rather be at the first day of a film festival with his best friend, Kevin; and Noah isn’t looking forward to having to make small talk with his classmates at this new school.

But when the three of them stumble upon a dead body in the woods, miss the last ferry back home, and then have to spend the night on Raven Island, they find that they need each other now more than ever. They must work together to uncover a killer, outrun a motley ghost-hunting crew, and expose the age-old secrets of the island all before daybreak. 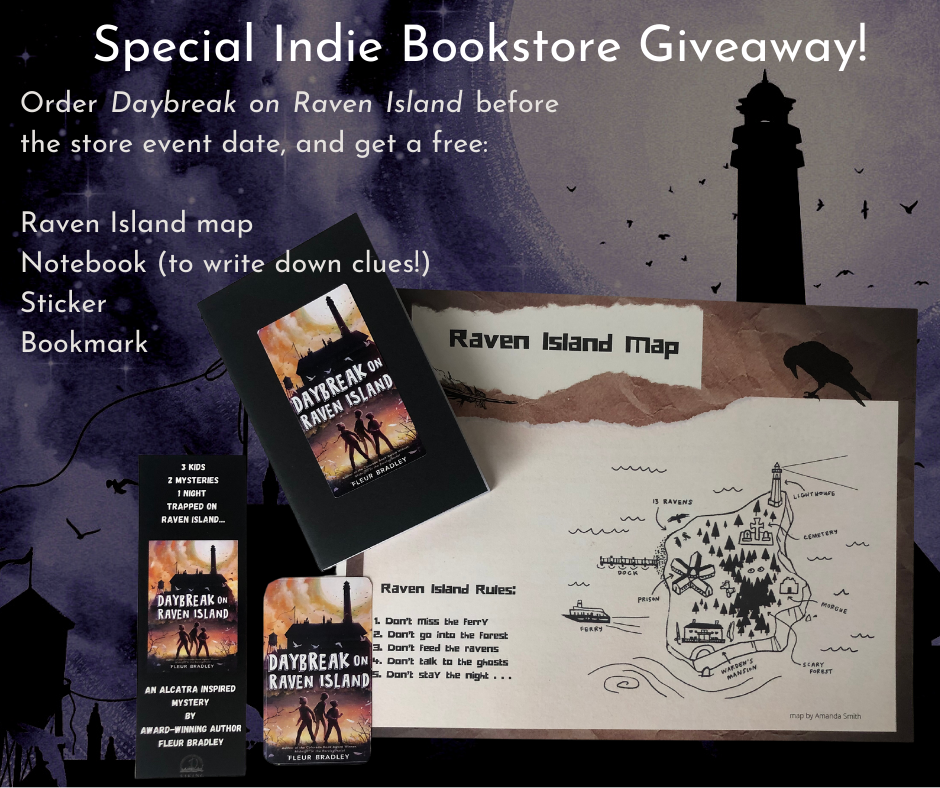 Sounds cool, right? If you go to the Wandering Jellyfish Bookstore or Second Star to Right Bookstore to order, I can even personalize the book before it gets shipped to you. And there some very cool preorder giveaways, like a Raven Island map….

Fleur Bradley has loved puzzles and (scary) mysteries ever since she first discovered Agatha Christie novels. She’s the author of numerous mysteries for kids, including Midnight at the Barclay Hotel, which was on many award lists, including the Reading the West, Agatha and Anthony Awards, Sasquatch Award, and won the SCBWI Crystal Kite Award, Sunshine State Young Readers Award and the Colorado Book Award.

A reluctant reader herself, Fleur regularly does librarian and educator conference talks on ways to reach reluctant readers. Originally from the Netherlands, she now lives in Colorado with her family and entirely too many rescue animals. Find out more about Fleur at http://www.ftbradley.com and follow her on Twitter @FTBradleyAuthor.