Protagonists in stories need counterbalancing. They need opposing forces, obstacles, difficulties. Why? Because we all contend with difficulties in life, and the primary purpose of story is to give readers examples of forces in opposition.

Kids need to learn how to deal with the many issues they will face in life, and story is one way kids find examples to “live by”. How does Harry Potter assume an identity as a wizard, and what mistakes does he make that he needs to learn from? (Hint: he’s constantly questioning authority, which gets him into trouble; he may be right, but often goes about defending himself in an abrasive fashion; he has to live up to huge expectations, which makes him want to ignore advice, etc.) 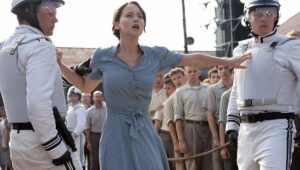 Katniss in opposition to the Capitol

How the Antagonist Thinks

By reading the above, it would be natural to assume that the antagonist is just plain bad. Evil. Snidely Whiplash, twisting his mustache. But that’s incorrect.

In the best stories, the antagonist thinks he or she is the hero. Voldemort is ridding the wizarding world of the pestilence of Muggles and oh, by the way, he was bullied as a boy. The Capitol is reminding its people that rebellion leads to punishment, and oh, by the way, rebellion leads to social disruption. (I don’t know what nature is thinking about in Hatchet, but let’s assume nature, as it does in Jurassic Park,  “will find a way”.) As such, the antagonist is not a flat cut-out, but a three-dimensional nuanced character with flaws, pitiable losses, and, yes, strengths – even if we and the protagonist come to see those strengths as demonic.

In The Artifact Hunters the antagonist feels misunderstood and wants his lost high position back, and to achieve that, he must defeat Isaac and steal Isaac’s key. In The Charmed Children of Rookskill Castle, the antagonist has been wounded in love, and believes she must find immortality and personal power by exploiting the children. Neither believes they are bad, just getting what they are entitled to receive after suffering.

So, Your Final Hot Tip

Make your antagonist nuanced. Give him or her flaws, desires, losses, even relatable strengths. Your story will be more powerful for it.