I was lucky to visit Prague just as I was editing The Artifact Hunters, and we spent four days researching for Isaac’s backstory and childhood experiences. Prague is a beautiful city, occupied by the Nazis, who turned the country into a “Protectorate”.

The Old-New Synagogue and Josefov 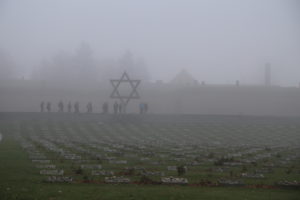 Terezin in morning fog. An eerie sight of the graveyard of prisoners next to the camp.

Isaac Wolf, my main character in The Artifact Hunters, is a secular Jewish boy growing up in the Josefov sector of Prague, Czechoslovakia (now the Czech Republic). Before the Nazis occupied the country in 1939 Isaac would have been very familiar with the Old-New Synagogue, but the Nazis closed it during the occupation. Built in 1270, it is the oldest surviving synagogue in Europe. I don’t have a picture good enough to share – it is a small old building.

Of course, the Nazis dealt harshly with the Jewish people of Czechoslovakia. We also visited the concentration camp of Terezin outside of Prague, a haunting experience. The book by Michael Gruenbaum in my Resources, below, is set in Terezin. 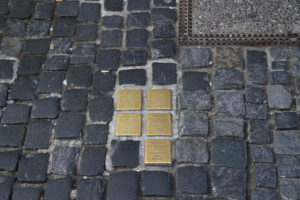 One of the things that caught my attention while we toured the Josefov sector was something called “stumbling stones”. The streets of Prague are still largely paved with rough ancient cobbles. The stumbling stones were made to commemorate those who were victims of the Nazi regime, and are brass replacements for the cobbles, and inscribed with the names of the dead.

The Golem of Prague 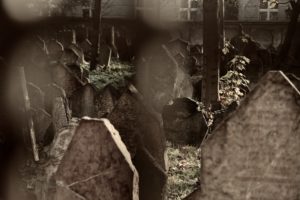 A view of the cemetery in Josefov, which frightened Isaac in my story. It is odd – people were interred over the centuries on top of previous generations.

The Synagogue also contains a mystery of sorts. Legend has it that in 1580 Rabbi Judah Loew ben Bezalel made a creature out of clay and brought it to life by placing the sacred name of God, written on parchment, in the mouth of the creature which he called the Golem (other stories say that he inscribed a word on the creature’s forehead, but the result was the same). He made the Golem to protect the Jewish people of his time from persecution.

But the Golem became an out-of-control monster, killing at random, so the Rabbi tricked his creation, removed the parchment, and the Golem fell to pieces. It is said that Rabbi Loew placed those pieces of the Golem in the attic of the Old-New Synagogue, where it remains today.

Somewhere There Is Still A Sun, by Michael Gruenbaum with Todd Hasak-Lowy, Aladdin, 2017.

“A Legendary Protector Formed From a Lump of Clay and a Mound of Terror”, by Edward Rothstein, The New York Times, September 11, 2006.