I had a lot of fun writing The Artifact Hunters, partly because, well…artifacts! I could use real items from history, and things from legends, and things from fairy tales, because just about anything could become a magical artifact – an item that could be endowed with magical properties.

The very first of these is something I discovered by accident.

Scary-looking but also fascinating, a Death’s Head Watch that happened to pop up in my research immediately inspired the story of The Artifact Hunters, because I wanted my story to have something to do with time.

And, mind you, this watch is a real thing.

Watches were invented in the seventeenth century, and word as pendants, what we would call today “pocket watches.” In the 17th and 18th centuries, certain of these pocket watches were housed in a silver case that resembled a human skull. Yes, a skull.

These watches are creepy, but that was the point – they were meant to remind the user that death is always on the horizon. Hence some were inscribed with the words memento mori (“remember that you will die”, in Latin). About the size of a small apple, they are also often elaborately decorated with engravings that made the message even more plain: images of Adam and Eve, images of Death with his sickle, images of castles next to huts to remind the user that wealth doesn’t prevent one’s eventual demise. The skull encased the watch face and movement and the watch is viewed by opening the jaw.

Legend has it that Mary Queen of Scots carried a Death’s Head watch. Upon her execution it was reportedly given to her favorite lady-in-waiting, but the watch disappeared for centuries. Recently a London museum has tried to verify the identity of a Death’s Head watch as the one owned by Queen Mary. The mystery and history of this watch gave rise to my idea that it was a Witch’s Watch, and was cursed. 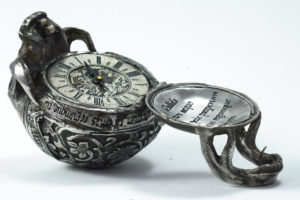 To find out more about the particular watch in The Artifact Hunters you’ll have to wait for the story!

Also, if in London, visit the Clockmaker’s Museum. Reportedly, the Death’s Head Watch in their collection is the one owned by Mary, Queen of Scots.

One Response to “The Death’s Head Watch”