But I’ll let you in on a little secret.

I’m calling it a sequel.

There are some differences between the two books. For one thing, Artifact Hunters takes place two years after Charmed Children, though World War 2 is still raging. For another, this new story is told from the point of view of a Jewish boy named Isaac Wolf, who has escaped Nazi-occupied Prague, and arrived at Rookskill Castle carrying a box containing…something magical. Mysterious. Scary. 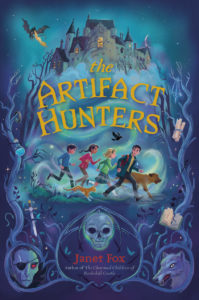 And Isaac is being pursued by…well. It’s kind of creepy, as you’ll find out.

And here’s the coolest part. Time travel. Yup – there is time travel in The Artifact Hunters, so you’ll see some really neat places in the past.

If you’ve read Charmed Children, you’ll also see familiar characters, like Kat Bateson. And you’ll find some answers to what happened to others, like the magister, and even Lady Eleanor.

And what about that weird castle itself? Are there other creatures about, ghosts and such? Hmm.

You may wonder about artifacts, about what they are. Here’s what Amelie (remember her? She’s Kat’s sister in Charmed Children) has to say:

Amelie said, “Kat saved everyone in Rookskill from a monster who was using a magical artifact.”

“What does this mean, a magical artifact?” Isaac asked.

“An artifact is an old object, of any kind,” Amelie said. “Jewelry. A sword. A mirror. A potion. But a magical artifact is infused with power. Some of the stuff of legends, like, you know, Excalibur. Or Aladdin’s lamp with the genie inside or the Chinese emperor’s nightingale. Other objects may have magic but no stories about them. Yet.” She paused. “A magical artifact can be just about anything.”

I’m going to be discussing some of these artifacts and some of the historical aspects of World War 2 and such over the next few weeks. I made fascinating discoveries during the writing of this book, and I really can’t wait to share.

Because I believe there is magic in this world.

Please stay tuned, and check out The Artifact Hunters, available for preorder now – thanks!! – at any of these fine booksellers: