This is the fourth post in my series on character.

We need to see your character’s internal desire explicit on the page, but your character also needs something driving her forward in the plot, and this is her external goal.

The internal desire and external goal are related, of course, but they can be quite different. The external goal is what we see on the surface of the story. It’s the mystery of who-done-it. It’s the McGuffin. It’s the Lost Ark. It’s inherent in the story and set within your plot, and is set in motion in the inciting incident that starts your story.

This is in contrast to the internal desire, which has been within your character from long before your story began.

In the previous post I used some examples of internal desire – let’s see how the same stories express the external goals.

Harry Potter’s external goal is to defeat Voldemort. It’s that simple. Voldemort is the antagonist, and he’s pretty awful not only to Harry but also to his friends, and by the end, to the entire world, magical and muggle.

Katniss Everdeen’s external goal is to defeat the hierarchy that created and supports the Hunger Games. She survives through force of will, primarily in order to bring down this terrible society.

Frodo Baggins’s external goal is to get rid of the ring of power by throwing it into Mount Doom, and thereby defeating Sauron. 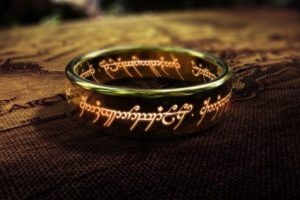 A Good Story Needs Both

We’ve all seen movies or read books in which things are all action, all the time. Pretty boring, in my view. Without the layer of internal desire, the external goal is pure entertainment without depth. But without a compelling external goal, a story can be equally boring – an inside-your-head ego trip.

One of the reasons I think the Avengers movie series is so successful is that, while there’s a ton of action, each of the characters also has emotional depth and an internal arc (from love story to filial responsibility to struggles with rage). The stories are kept in balance, and we keep watching. 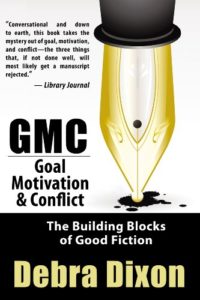 Notice also how often a great story pits the external goal against the internal desire. Harry wants a family, but in his struggle against Voldemort he puts everyone he loves in danger – and he is internally conflicted, too, as is Frodo in his mission to destroy the ring. Katniss wants to protect Prim, but she antagonizes the “state” and threatens everyone and everything by doing so. When a character’s internal desire bumps up against the external goal the result is conflict, that essential element in great fiction.

My recommended reading for this aspect of craft is Debra Dixon’s GMC: Goal, Motivation, & Conflict.

Next week we’ll pull this all together with what we mean by the story’s stakes.

2 Responses to “Driving Toward The End”