An Example of Backstory

When I was about five, my parents took me and my sister to Daytona Beach, Florida. Those were the days when you could drive a car right across the sand to the waterfront (I know, right?) It was, I’m pretty sure, my first beach experience, since we lived in the Midwest at the time. I had these beach toys I loved – a matching bucket, shovel, and fork in swirly pink and white vinyl. 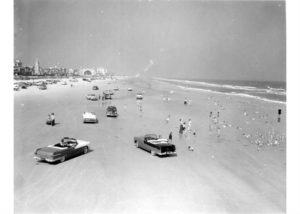 Daytona Beach, back in the day

At some point, fetching water, I lost the bucket and was desolate, and then, wading out sobbing while trying to retrieve it, I was knocked flat by a wave. I was under water for no more than maybe thirty seconds, and, after dragging me sputtering from the ocean, my dad found the bucket, but that was all it took. I hated swimming from that moment, and am still terrified in water over my head.

This fear was exacerbated when I was twelve and my parents insisted on swimming lessons that were conducted in a public pool where we girls were all forced to strip naked and take a public shower together before putting on our swim suits – something that today would be or should be illegal and at the time was utterly humiliating to a girl on the edge of puberty.

Now, just to add to that emotional baggage, my mom later told me a story about how she almost drowned in the ocean as a young woman, and when she was pulled from the water the undertow had stripped off her bathing suit. My worst fears all in one place.

The Wound Leads To The Misbelief

My relationship to water/swimming/the ocean would be an example of what is called a “backstory wound”. Imagine, now, a character with that wound who must confront the water during an emotional high point in the arc of a story. Who must act against all instincts created by that wound.

Lisa Cron, in her incisive book Story Genius, suggests that we all suffer from our backstory wounds, but in a particular fashion. The wound sets up a belief in the mind of the character. But this belief is based on the false premises made by deep emotions (like fear), so Cron calls it the character’s misbelief, because our cognitive unconscious “often steers us in the wrong direction, all the while thinking it’s doing us a favor.” Saving us from fear or embarrassment or loss.

Cron states: “How your protagonist overcomes this misbelief is what your story is about.” 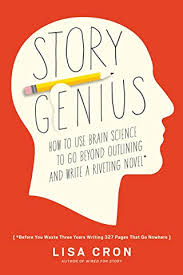 The Misbelief Directs The Story

A character’s story, then, is all about the how. In the case of my own backstory wound my misbelief could be any one of these:

Each of these misbeliefs would lead to a different kind of story, with different incidents and actions. In other words, the backstory wound and the history of a character with this wound sets up any number of possible story lines.

Your job as a writer is to:

This is only one of the ways to deepen your character and create a richer and more emotionally compelling story, but it’s certainly one of my favorites. Cron offers a number of exercises that will help you enrich your character.

2 Responses to “Backstory: What Your Character Knows”