When I began writing fiction (a long time ago, now) I had no idea what I was doing. Really. Not a clue. Sure, I’d been an English major in college. Yes, I loved to read. And, of course, I’d messed around with words and writing all through my youth. You could call it, “random acts of bad poetry”.

But writing a book, a novel, from start to finish? How did that even happen? Magic? Throwing a dictionary at the wall and seeing where the words landed? I had no idea. 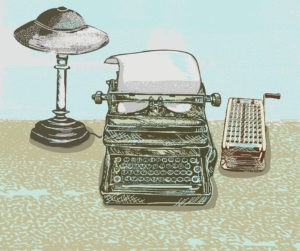 I bumbled around, trying to find my way. I wrote short stories, I sent them out, I accumulated rejections. I wrote three rather terrible novels for adults, and never bothered to send them out. So, I did what lots of people do.

I went back to school and got my MS in geology, then studied interior design, then moved to landscape architecture, then moved to working for a variety of nonprofits, then did a stint as a teacher of English. I was writing, but I was writing brochures and flyers and design proposals and lesson plans.

But writing – fiction writing – was still calling to me, and during a serious down time (a new baby) I went back to trying my hand at writing fiction. (Thank goodness, because I’d hate to be where I am today and never tried writing again. But I digress.)

How I Went Back to Writing

This time I found support through local writing groups run by authors. I sold a short story that won a local award. I sold a second short story to a prestigious journal. I discovered that writing for children was a thing, and that it really appealed to me and fit my voice, and I joined SCBWI. I wrote a short story that was published in Spider Magazine. I wrote a nonfiction self-help book for kids and sold it myself, a major event. But I still had no idea how to write a novel. I just wrote, and wrote, and wrote.

As it turns out, I was pantsing all the way.

What Is Pantsing? And, Does It Work?

Pantsing is the act of writing organically, or “by the seat of your pants”. It sits in opposition to “plotting”, or designing a book from start to finish before writing.

Because I had success with this pantsing model, it stuck with me all the way up to nearly the present. I thought I had to write this way because it was the only way my mind would work. And after all, E.L. Doctorow famously said, “Writing is like driving at night in the fog. You can only see as far as your headlights, but you can make the whole trip that way.” So, writing is supposed to be like flying blind, right?

I’ve recently discovered that there are ways to design a book that are not constraining, that can still allow for that organic pantsing style I like, because I do like the serendipity of discovering a character or a plot turn while I’m in the creative flow. But now I realize that having certain direction, having a template or a path, helps me to write faster, more efficiently, with greater depth and clarity and much less confusion or exhaustion. My characters come to life more quickly, my plot unfolds with fewer mis-steps, and I feel easier in my work.

It’s still essential to revise, of course, and I’m not saying it’s all perfect, but this revelation has freed me in unexpected ways. I’m hoping that I might convince you to try moving more toward the middle, from whichever end of the spectrum you have started.

Because I now believe it’s possible to end the war between plotter and pantser. Should we call it “plantsing”?

In future posts – stayed tuned for the next post in which I give you specific techniques – I’m going to share some of the things, some of the things I’ve learned that may help you to design your book in a plotting way, yet allowing you to still enjoy the freedom that comes with pantsing, with generating that creative energy that we all love to feel.

As an aside, I’m studying to become a book coach. I hope to be open to take on clients by summer 2020. You’ll hear more about what I’ll be doing, right here, and later as I launch Big Picture Story Coaching for kidlit authors. Please stay tuned.

2 Responses to “A War of Words: Plotter Versus Pantser”