Shortly after GET ORGANIZED WITHOUT LOSING IT came out in 2006 I was asked to participate in a live drive-time radio interview. The interviewer and callers clearly didn’t know that the book was for kids, as I very quickly realized that these adult callers were asking about their own problems with too much stuff.

One caller especially caught my attention. He’d cleaned out a lot of things from his house, put them in garbage bags, and stuffed them into a shed on his property. Now, he asked me, “What should I do with it?” 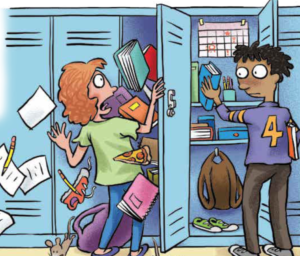 Illustration by Steve Mark from GET ORGANIZED

We all collect stuff throughout our lifetimes. In fact, we have much more stuff than we use, much, much more than we need in our homes – an average of 300,000 items! So, my second rule of stuff management is “use it or lose it.”

I love Marie Kondo’s approach to stuff. If it doesn’t “spark joy”, out it goes. But I developed some slightly different strategies to hers. Maybe they’ll help you peel away all that stuff you no longer need but can’t seem to part with.

Kondo suggests dumping all clothes in a single pile. I like to take a different approach to clothes, partly because I don’t have all the time in the world, so I prefer to tackle getting rid of stuff in small bites. Also, by sorting by clothing type I can see where I have gaps/needs rather than shopping for shopping’s sake.

I chose one type of clothing – say, slacks – take them all out of the closet and sort them. Things that don’t fit, are out of style, are worn out – they go. Then I look at them with a kind of “spark joy” attitude: do I love this item or not? It doesn’t matter how nice it is if I won’t wear it because there’s something about it that I don’t love.

As a corollary to this, I used to work as a teacher, and needed “teacher clothes”. Now, most days, I’m at my desk in my own home and need comfortable clothes that also look nice enough in case someone suggests meeting up for a glass of wine at the end of the day. The teacher clothes went to Goodwill, where they can be put to much better use.

And…if I haven’t worn something within a year, I give it away. Why hang onto things I never wear?

While Kondo sorts by category of things (i.e., clothes, then papers), I prefer to tackle one room at a time. Again, this is because I don’t want to spend days on end making this clean-up happen. I’d rather spend a couple of hours on a weekend going through one set of drawers or one section of closet and really paring things out. I find it less overwhelming, so maybe you will, too.

All stuff management is really predicated on the same principle, whether you call it “sparking joy” or “paring down” or “cleaning out” or whatever – it’s a matter of how much we all have that we don’t need.

Once we’ve acquired a thing, whether through a purchase or a gift, it takes on certain intrinsic value. But…rather than think that an object has value, think about how the space it consumes has value. It’s like seeing a work of art and realizing that the “white space” around an object in the art has as much impact as the object itself. By getting rid of stuff, you are giving value to what you’ve decided to keep.

The key is to revisit what “value” means to you. Maybe the object will have value for someone else. Or maybe it really has no value at all. Approaching stuff management without emotional attachment is what matters here. And if that’s hard for you (like it was for the man who stuffed the stuff into his storage shed), that’s okay.

The bottom line: once you’ve decided you are done with an object, put it in that plastic bag and don’t take it out again. Take it to Goodwill or to a recycling place or the garbage can. Today. You’ll actually feel great.

2 Responses to “Managing Your Stuff, Part 2”