I’m delighted to report that a bunch of us middle grade authors who write “spooky” books – from the moody to the seriously scary (I’ve been told that The Charmed Children of Rookskill Castle is seriously scary) – have joined together to form a group of Monstrously Good Middle Grade peeps. Very soon we’ll open our website (SpookyMiddleGrade.com), which features information for kids, teachers, and librarians. We’ve got tons of fun things planned (group author Skype visits, for example), so please stay tuned!

But while we were all chatting it emerged that most of us had graveyard experiences as kids.

Now, I don’t think that having such a might-be-creepy background is a requirement for writing spooky books, but it is interesting. Right? 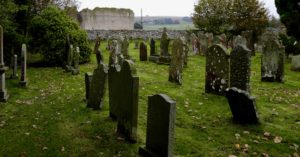 I have my own graveyard experience. My dad was an Episcopal priest, so we lived next door to the church, which meant next door to the graveyard. This was a very old New England church. And a very old graveyard. But that didn’t bother me. I found my own secret spot inside the graveyard, where I would take my reading, and my homework, and my daydreams. It was a little nook with a big headstone on one side and overgrown shrubs on two other sides, so I could sit there completely hidden for hours. I never thought of it as scary…then. Of course, there was also an underground mausoleum with a broken door, and I looked inside that tiny dark place more than once – on a dare, but also because I was curious.

Did I see ghosts in that graveyard? You may ask…

But now I’ve asked my fellow spooky authors to tell us about their graveyard “hooks”. So many responded that I’ve got one part this week, and one part next, so here’s part one: 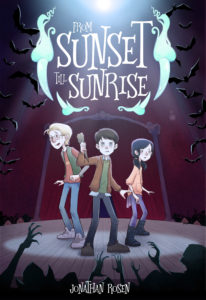 From author Jonathan Rosen: I grew up in a section called of Brooklyn called Gravesend, which was settled in around the 1640’s. Such a creepy name, and as a matter of fact, that’s why I named the town in my book, Night of the Living Cuddle Bunnies, Gravesend. I figured, why make anything else up? The reality is creepier than what I could come up with. I lived right next to Gravesend Neck Road, and if you followed it all the way, it led to a really old cemetery, which we used to go exploring. It was right in the middle of a neighborhood, near homes. So creepy that everyone was living around it, with tombstones dating back hundreds of years. I was fascinated by that and it always spurred the imagination of what it was like to live right next to this old cemetery. 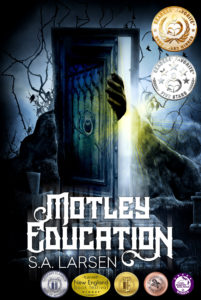 From S.A. Larsen: As an elementary-age child, I used to visit our town cemetery often with my grandparents. By the time I was middle school and high school age, both my grandparents had passed away, and I found myself drawn to that same cemetery – which I preferred to call the boneyard much like my main character, Ebony Charmed in Motley Education. I’d stroll what felt like endless rows of graves after graves, lifetimes after lifetimes. I could create unseen worlds and playgrounds for the dead. (I think that’s why I fell in love with Lydia the first time I watched Betelgeuse; she got me.) Sometimes, when I’d find an interesting name etched on an old tombstone, I’d sit and stay a while. And crypts? They were way cool! Who was in there? Were they really in there? OMGosh, I needed to know! Weird? Maybe, but I was completely fascinated by who these people were, what kind of life they led, and what they left behind. I was never frightened there; not really. Of course, there were times my mind would play tricks on me, fooling me into thinking I saw something I didn’t. And then there were the times during middle school when a group of use would wait until dark, sneak into the cemetery (no telling!), and scare the screams out of each other. I just loved that! 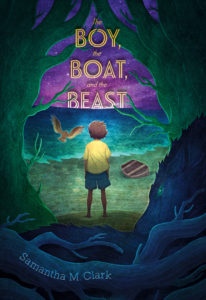 From Sam Clark: I didn’t live next to a graveyard, but when I was doing my A-levels in England, I used to walk home from school and there was a graveyard smack bang in the middle of a short cut. And, given that it was an old English town, the graves were ancient. Many had slabs of concrete over the actual grave, as well as headstones, and a lot of the slabs were broken. It was easy to imagine bony fingers inching around the broken pieces and pushing up! In the summer, it wasn’t too much of an issue. I’d walk through there, but I’d walk quickly with eyes darting around to make sure no zombies were rising. In the winter, though, when it got dark around 4pm, I only took the short cut once. I accidentally got locked in the graveyard and had to climb the gate on the other side to get out. I scrambled up that gate so fast! I walked the long way home after that.

4 Responses to “The Graveyard Hook, Part 1”