I’ve never been to Yosemite National Park. This is something I’m longing to remedy. In the meantime, I can live vicariously, along with all of you, through Barb Rosenstock’s THE CAMPING TRIP THAT CHANGED AMERICA. This lovely picture book, illustrated by Mordicai Gerstein, tells the story of how John Muir and Theodore Roosevelt saved an American treasure for all of us to enjoy. 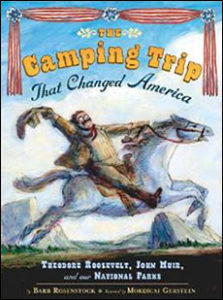 I asked Barb a couple of questions, and here are her answers:

Which came first for you – a visit to Yosemite, or the inspiration to write THE CAMPING TRIP THAT CHANGED AMERICA? What did you think when you saw the Park?

I first learned about the camping trip in a review of an adult book on Theodore Roosevelt. A few months later, I was researching mountain vacations online and typed in “history” too (what history nerd wouldn’t?) and up popped a photo of Theodore Roosevelt and John Muir standing alone at Glacier Point in Yosemite.  Presidents are NEVER alone now, there are always hordes of people around them. What was so important then that Roosevelt went into the wilderness with John Muir as a guide? I started researching. I started writing. I did NOT visit Yosemite. I wrote 37 versions of the book and somewhere in there, an editor at Dial became interested in the story. And THEN, my librarian sister convinced me to travel to Yosemite. 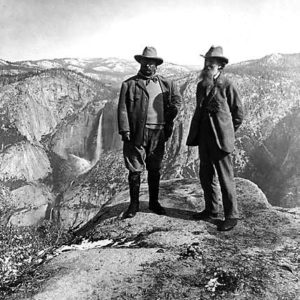 She said a person from the flat state of Illinois couldn’t write about the mountains without visiting them. I did not expect to be as overwhelmed or emotional or patriotic. Yosemite! That such a place existed! Waterfalls and wildflowers. Sky and earth. Quiet.. There are no words, just go yourself someday. While at the park, I met Lee Stetson, who plays Muir at the park (in Ken Burns’ documentary too!) Just talking with Lee and seeing him bring Muir to life helped my writing,  as did Linda Eade,  the wonderful librarian at Yosemite. Later in the week, I walked to the exact spot TR and Muir camped and just took it in. I kept coming back to the idea, This place was almost destroyed. Muir saved it. Roosevelt saved it. Countless of others who worked with them and in all the years after saved it. The National Park Service saved it. For all of us. The final manuscript of The Camping Trip that Changed America, would not have happened if I hadn’t visited Yosemite. The book is historical fiction, informed by research, but it also told through the trees, the rock and the water. 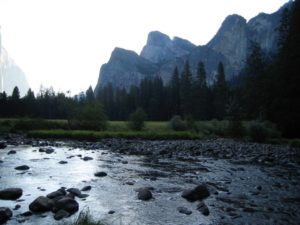 What about the meeting between Muir and Roosevelt makes it so special and do you think someone could still do what they did?

I think it’s special because these two men could not have been more different. They were total opposites in many ways: rich/poor, founder/immigrant, extrovert/introvert, war hero/draft dodger, big city/wilderness…I could go on and on. The story is about two opposites that find common ground. How? Both were avid readers and wonderful writers.  It’s the story of two men of very different temperaments, going out in nature and working to save their country’s natural treasures for all of us. In our times, maybe we should send the whole U.S. Congress on a year-long camping trip. 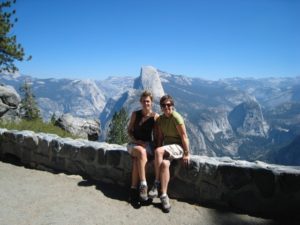 Barb and her sister at Glacier Point

So yes, I always think there’s hope for people (even politicians)  to do what they did. To stand up. To act boldly. To make positive changes that will be good for our grandchildren and great-grandchildren.

We are so happy to be able to bring you our Page Through The Parks tour. We’ve got a downloadable list of books for you, plus three Goodreads’ giveaways: Barb’s THE CAMPING TRIP THAT CHANGED AMERICA is here; Liz Garton Scanlon’s IN THE CANYON is here; and my giveaway of FAITHFUL is here. Plus…we’ve got a wonderful teacher and librarian giveaway with all these fun items: a copy of IN THE CANYON, signed by both author and illustrator; a piece of Canyon-inspired art by Ashley Wolff; a beautiful chain-stitch embroidered Sequoia patch; a hardcover copy of THE CAMPING TRIP THAT CHANGED AMERICA signed by Barb; a grow your own Sequoia kit from “Tree in a Box”; a framed 13 x 19 poster of John Muir and Teddy Roosevelt camping in Yosemite; a 500-piece Yosemite jigsaw puzzle; a signed copy of FAITHFUL; a Yellowstone Old Faithful magnet; aYellowstone coffee mug; and to hold all that stuff, a Yellowstone tote bag. Enter now!

6 Responses to “Page Through The Parks: Yosemite!”