“This is nothing. Just wait! You and your pa heading out on the Tour today?”

“No.” I stared over the milky-white terraces, avoiding his eyes, plucking at my gloves. Whatever the Tour was, it would cost money. Which apparently we had none of. I sighed. “What is the Tour, anyway?” 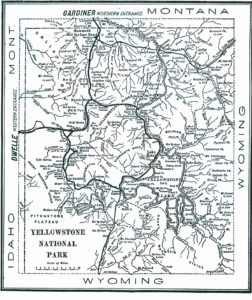 “It’s a tour through the entire Park. You’ll see it all, all the geysers, hot springs – with any luck, animals, too.” Page 87, FAITHFUL.

Yellowstone, our nation’s first National Park, was in 1904 nicknamed “Wonderland”, and it certainly lived up to the name then as today. The Park was open to tourists who mostly would have booked a Grand Tour through one of a number of organizations. Those tourists were called “dudes”, while tourists who made their own way through the Park and camped rather than stayed in one of the hotels were “sagebrushers.” Most entered the Park as Maggie did, through the North Entrance at Gardiner, and clambered aboard a Tallyho stagecoach for the ride to Mammoth Hot Springs. 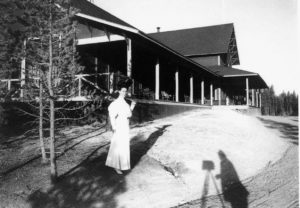 Hotel at Norris (no longer exists)

Yellowstone in 1904 looked very similar to Yellowstone today, with the road layout largely complete (except for the leg between Canyon north past Mount Washburn.) A number of hotels provided stopping points along the way, from two at Mammoth (the National and the far more humble Cottage), to the Firehole and Fountain hotels which preceded the Old Faithful Inn, to the Lake Hotel, and finally the Canyon Hotel. Once the Old Faithful Inn opened in 1904 the Firehole and Fountain were closed. 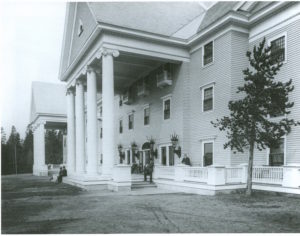 The Old Faithful Inn was not only beautiful – an outstanding log structure – but also sported all the modern conveniences (electricity, hot running water). It still retains its charm, including the original massive stone fireplace and huge clock, and although the topmost galleries in the entry hall are closed today, in 1904 musicians serenaded guests from almost 80 feet above. The Lake Hotel was a classic frame-style building, also fully appointed and luxurious.

Tent campers had the option of traveling the “Wylie Way”, which offered permanent, gaily candy-striped tent camps and a less formal (and cheaper) accommodation. 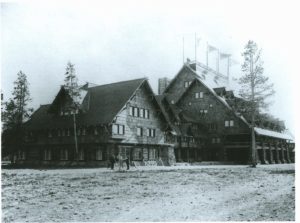 Tourists naturally visited all the hot springs and geysers along the way. They were also treated to nightly bear feedings, which took place behind the hotels, where food scraps were piled high and as many as a dozen bears would come out to dine while visitors watched from bleachers. Even women in ankle-length skirts climbed the rough walls of the Grand Canyon of the Yellowstone via primitive ladders. And it was possible to take a ferry from Lake out to Dot Island, which housed live elk and buffalo in pens.

The entire tour, including stops, took about six days. One tourist in 1917 remarked: “I have just completed the six days’ circular journey by stage through the Yellowstone National Park. I am moved to admiration, but still more to awe.”

See my previous post on 1900s social norms here; in my next post I’ll give you a glimpse into the wilder side of the west.