As a lover of historical fiction, I’m always on the hunt for excellent reads, and I’m thrilled that BLUE BIRDS, Caroline Starr Rose’s second novel (following her highly acclaimed debut MAY B.), is available now!

Here’s a synopsis of BLUE BIRDS: “It’s 1587 and twelve-year-old Alis has made the long journey with her parents from England to help settle the New World, the land christened Virginia in honor of the Queen. And Alis couldn’t be happier. While the streets of London were crowded and dirty, this new land, with its trees and birds and sky, calls to Alis. Here she feels free. But the land, the island Roanoke, is also inhabited by the Roanoke tribe and tensions between them and the English are running high, soon turning deadly.

“Amid the strife, Alis meets and befriends Kimi, a Roanoke girl about her age. Though the two don’t even speak the same language, these girls form a special bond as close as sisters, willing to risk everything for the other. Finally, Alis must make an impossible choice when her family resolves to leave the island and bloodshed behind.” 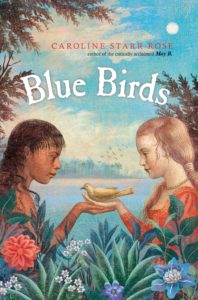 Caroline has written a guest post on the crafting of BLUE BIRDS, and in particular, the alternating voices of the novel:

There are always a few things that lead me to a book, but I’m not fully aware of them at the beginning. I was drawn to the Lost Colony story while teaching fifth-grade social studies in 2008. I hadn’t thought about those 117 missing people and their mysterious last message, CROATOAN, since my own school days. Coincidentally, our Scholastic book order had several books about the Lost Colony available at the same time. I ordered them and shared what I was learning with my students. This is where the seeds of BLUE BIRDS story began.

But I can look further back and see that Alis and Kimi’s friendship came from my own girlhood relationships. I relied a lot on those feelings of belonging, the intensity and sincerity of those early bonds to tell the girls’ story.

When I first started drafting BLUE BIRDS, the story came from only Alis’s perspective. But the more I wrote, the more I realized the story hinged on Alis and Kimi’s forbidden friendship, and to most truthfully tell it, I needed both girls’ voices. This was kind of terrifying. I worried how others might feel about a non-Native author speaking for a Native girl. I wondered if I even had permission to try. But I kept returning to the things I had in common with both girls — feeling understood by another person, the way identity is often formed out of young friendship. This gave me enough courage to keep moving forward with the writing. 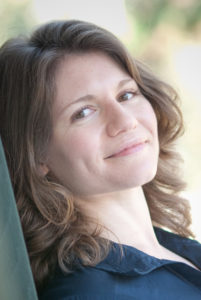 As strange as it sounds, verse has become my default. I find it a really in-the-moment way to write historical fiction. It’s immediate, spare, and lets us into a character’s inner life very quickly.

For this book in particular, verse also became a wonderful way to tell a story in two voices. Readers move quickly from Kimi to Alis and back again. And when the girls share a poem, I was able through line and stanza placement to “speak” their story visually, adding one more layer of communication. Verse is magical that way!

Caroline Starr Rose was named a Publishers Weekly Flying Start Author for her debut novel, MAY B., which was an ALA-ALSC Notable Children’s Book and received two starred reviews. She spent her childhood in the deserts of Saudi Arabia and New Mexico, camping by the Red Sea in one and eating red chile in the other. She has taught social studies and English, and worked to instill in her students a passion for books, an enthusiasm for experimenting with words, and a curiosity about the past. Visit her at www.carolinestarrrose.com

2 Responses to “The “Magic of Verse” in BLUE BIRDS”