As I discussed in my last post, gangsters were one negative aspect of the Twenties. Here’s another:

treet Bombing of 1920 plays an important role in SIRENS, as the brother of one of the characters died in that blast, and the brothers of two other characters may be implicated in the bombing itself. Since no one knows to this day who carried it out, I was free to play with the possibilities…and the parallels to our own time.

Yes, there was a bombing on Wall Street long before 9/11. The similarities between the bombing in 1920 and that in 2011 are eerie.

They both took place in September. They were both the work of foreign nationals (although no one was ever convicted in the 1920 bombing, that foreigners were involved remains the belief). Both were related to anti-US sentiment following war years. Both were leveled at institutions of finance in the Wall Street area. Both killed scores of innocent people, although in 1920 “scores” meant 38 – but that was huge at the time.

Following World War 1, the number of immigrants coming into the US increased dramatically. Some of those, and some of the returning soldiers, brought ideas about government that were considered hostile to traditional American thinking. “Radicals,” “Bolshevists,” and “anarchists” were a few of terms tossed around, and pretty soon these terms and other derogatory epithets were applied to any foreigner/immigrant whether justified or not (sound familiar?) Tensions ran high, and the “Big Red Scare” created hysteria that set everyone on edge.

The government took radical measures to roust out these radicals, and succeeded in arrested a couple of Italian men, Sacco and Vanzetti, who were almost certainly involved in the anarchist movement, but were probably not responsible for any bombings of which they were ac 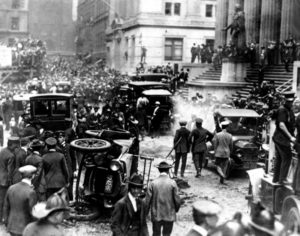 cused. It’s believed that the September 1920 Wall Street bombing was in retaliation for their arrest.

Regardless of perpetrator, it was an ugly incident. A horse-drawn wagon loaded with the bomb was parked at noon on September 16, right across the street from the offices of J.P. Morgan. The blast went off a few minutes later, killing 38, wounding 143 (plus the horse.) The ostensible target, Mr. Morgan himself, was not in his offices, and only one person in that office was killed; but there was a large number of clerks, secretari

es, delivery people and so on out on the streets for lunch break – innocents, all.

It turned out that this bombing was the culmination of the Red Scare. After 1920 other obsessions took the place of anti-immigrant sentiments: Prohibition, radio, advertising, the automobile, sports, clothing, jazz, the Ku Klux Klan, moving pictures, flappers….all the complex things that made the 1920s “roar.”

The moral of this story? Life is complex; don’t jump to conclusions; until we learn, we are doomed to repeat our lessons.

One Response to “The “Roaring Twenties” You May Not Know: Post 7 – Radicals”