In one scene in SIRENS Jo goes to a New York speakeasy. She can see that Melody is “up all night” most nights. So were most young people in the cities, which is one reason they were the Roaring Twenties. What was that all about?

They were the “Roaring Twenties.” It was the decade of “anything goes.” Young girls were nicknamed “flappers” and danced and partied all night long. 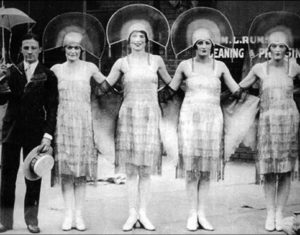 We carry these images of the 1920s because they are true. And New York City was a hotbed of the activity that led to these images – it was, from the title of a forgotten silent film of the decade, “the city that never sleeps.”

So many things contributed to the party-on atmosphere of the 1920s that a complete discussion would take a book (and if you’re curious, check out Anything Goes by Lucy Moore.) But several key contributing factors were Prohibition, the rise of the automobile, the birth of the movies, and a reckless, self-indulgent attitude cultivated in books and movies and adopted by the youth.

The prohibition of the manufacture, transport and sale of alcohol by the 18th Amendment that became law in 1920 had the opposite of its intended affect. Rather than preventing people from drinking, it encouraged gangsters to step i

n to traffic in or “bootleg” alcohol. Prohibition also led to the use of “speakeasies” – underground pubs (often literally underground, in basements) where one could buy a drink. Police officers corrupted by easy money looked the other way when alcohol was involved, and backyard distillers made their own “moonshine.”

Because alcohol was illegal and one had to be “in the know” to find it, the illicit activity was exciting and encouraged daring young people to seek out venues that proliferated throughout New York. One society column, penned by the anonymous “Lipstick” (Lois Long), detailed the shenanigans of all-night parties, speakeasy busts, and arrests. Few took Prohibition seriously, which led to a devil-may-care attitude.

And then there was the automobile. For the first time, a young man and young woman could drive away from parental supervision and spend plenty of ti 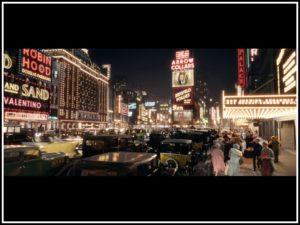 me alone. This led to a lot of…well, back then it was called “canoodling.” Old-fashioned Victorian attitudes toward sex gave way to uninhibited behavior, and “petting parties” were common.

Popular books and movies only reinforced these attitudes. From The Great Gatsby to The Sheik the code was “eat, drink, and be merry;” “live without regret.” Flappers adopted an almost uniform clothing style that not only set them apart from their elders but allowed freedom of movement and exposed a good deal of skin, and actresses like Clara Bow and Colleen Moore epitomized the flapper in a string of movie successes and in their off-screen lives. 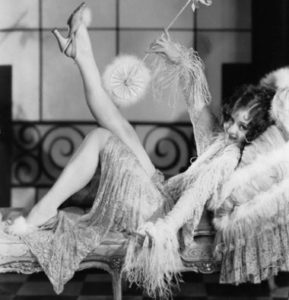 Many other things contributed directly or indirectly to the party-on atmosphere of New York in the 1920s: jazz music, rampant political corruption, increase in the divorce rate, the rise of advertising, the development of cosmetics. Even The Great War and the flu pandemic of 1919 had an impact on this devil-may-care behavior. Regardless of cause, the effect was one of abandoned fun.

And New York City was the epicenter of fun in the Roaring Twenties, all night long.

In my next post, we’ll have a look at Prohibition.

Check out my short video for more images:

2 Responses to “The “Roaring Twenties” You May Not Know: Post 4. Flappers”