In my previous post, I addressed women’s suffrage. Now let’s look at another impact on behavior. Fashion really took a turn in the 1920s, due in part to the influence of Coco Chanel…

Kicking Up Their Heels: The Women’s Fashion Revolution of the 1920s

defined in part by how they looked. When in SIRENS Jo meets her cousin Melody, she sees the perfect flapper; and when Jo borrows her cousin’s clothes she worries she’s turning into a flapper. But, golly, it was a great look! And it sure beat wearing those horrific corsets.

In an earlier blog post I talked about some of the reasons fashion changed so radically in the years from 1900 to 1925. The war, the suffrage movement, the feminist movement, women in the work force, even cinema, the automobile and advertising – these elements came together to encourage more practical, less restrictive women’s clothing (corsets – gone!)

But what happened in the early 1920s pushed the clothing evolution into revolution. And the greatest proponent and inventor of the new fashion was Coco Chanel. 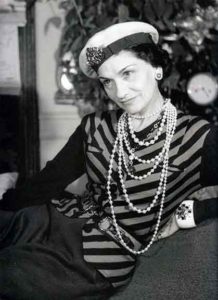 Chanel was thin, athletic – she was a great horsewoman – and attractive, and she personally favored less restrictive clothing, adopting men’s clothing and the comfortable styles worn by sailors (like boatneck sweaters and espadrilles.) It was her personal taste that women found attractive, as Chanel used knits and flannels rather than silks and taffetas, and she dispensed with frills and ruffles in favor of simple lines that allowed freedom of movement. To make up for the lack of fabric adornment, Chanel introduced beadwork and patterned cloth. It was Chanel’s slim, straight silhouette that became the fashion almost overnight.

Young women in America particularly took to Chanel’s chic new look. Dresses were tubular, with no waist or a dropped waist, and those huge, overdone hats were reduced to the close-fitting cloche. Long hair went out of style – too fussy, too much work – to be replaced by the short, loosely styled bob. Hemlines in about 1919 were mid-calf, but by 1925 had climbed well above the knee. While frills were gone, they were replaced by the “Oriental” look that featured beading on the dresses, and jewelry of beads, bangles, and long strands of pearls.

Because these slender dress styles sporting bare arms and lots of leg look best on young figures, those who dressed in Chanel style were mostly young and thin. And the young women of the 1920s were already pushing against their elders’ formal restraints across society. When women entered the work force during The Great War, they didn’t want to return to passive domestic duties. They needed comfortable clothes, and they needed them ready to wear.

That was the other part of this revolution in fashion: the shift away from elaborate hand-sewn costumes made from delicate fabrics that required lots of care to practical fabrics sewn into practical garments that could be purchased – by an ordinary working girl – off the rack. Technology combine

d with practicality: a factory could produce many more dresses using far less fabric with the new styles. And a girl could walk into a shop with her week’s wages and walk out with the latest flapper style, and have money left over for entertainment.

Which was a huge part of the 1920s culture. Dancing, drinking, and dating – every self-respecting flapper wanted to be out all night taking in the “scene” and being “seen.” More about that in an upcoming post.

See more women’s fashion of the 1920s on my dedicated Pinterest page.

2 Responses to “The “Roaring Twenties” You May Not Know: Post 3. The Women’s Fashion Revolution”