When my son (pen name K. MacCabe) was very young, Star Trek, Next Generation was in syndication and playing every night right at dinner prep time. That one-hour show became his thing, and I had the peace and quiet to get ready for the evening.

Little did I know that by doing so I was raising not only a Trekkie but a devoted fan of science fiction.

Today he is my writing buddy, with a serious talent for writing, among other genres, science fiction. He’s currently on track to carve out a career as a writer, and for my part, he is a fantastic second reader and a partner in my coaching business.

I’ve invited him to come on my blog from time to time, and today he wanted to share a book review, so here he is, writing about Head On, by John Scalzi.

A science fiction thriller set in a not-so-distant future, draped in a murder mystery and confronting social issues that add to the depth of the novel overall. The book itself is straightforward in its narrative construction, but that is by no means a weakness. In fact, it uses its simplicity beautifully to tackle social issues in a manner in which sci-fi truly excels. 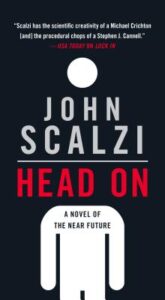 The by-proxy technique that sci-fi is famous for allows Scalzi to discuss subjects of disenfranchisement and prejudice through Hadens, a group of people whose bodies have been damaged beyond repair by an illness that leaves their brains mostly untouched. They connect to our world through Threeps – androids, which they pilot through an internet that we can only dream of having today.

The main character is one such Haden and an FBI agent named Chris Shane, who has a tight relationship with his partner Vann (it is also a source of comic relief many a time). The dynamic adds to the entertainment and pleasure of the read and is one of the strongest points of the novel.

Head On touches on light cyberpunk and science fiction themes, though the extremes of both genres are left by the wayside. The book very much feels like a near future cop procedural that uses its light themology to enhance the elements which Scalzi wishes to discuss within its pages. For those who enjoy procedurals, cyberpunk or science fiction, this book is for you, and it should be a treat to read, even if you did not pick up its predecessor Lock In.

It should be noted, however, the book deals with adult themes such as sex and drugs: though not graphicly and does so with tact. I would not qualify Head On as YA safe, so keep it on the grownup shelf.