Newbery-honor-winning and National Book Award finalist Kathi Appelt is not only an author whose work I admire, she’s also a wonderful person. I consider her a true friend and mentor (and I know I’m not alone) who is responsible for guiding my writing career from the very beginning. Kathi has two new books out, the compelling young adult novel Angel Thieves (Simon & Schuster) and the charming picture book Max Attacks (Atheneum), illustrated by Penelope Dullaghan. I asked if she would answer a few questions for me, and she graciously obliged. Here first are the synopses of both books, and then an interview.

Cade Curtis is an angel thief, searching for the one angel who would be his last. 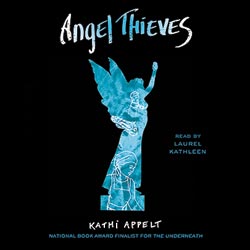 Zorra is a captive, caught and now lost by an exotic animals dealer, just waiting for an escape.

Soleil Broussard is a sweet believer, but her beliefs are tested by both forces of nature and forces of the heart.

Achsah is on the run, free from master but damned if she’ll leave behind her children he did not set free.

And the Bayou watches, silently guiding them all.

Angel Thieves is a masterpiece that stretches each character’s story across time—connected by the bayou, an angel, and a universal desire to be free.

This is Max. He attacks. From socks and strings to many a fish, attacking for Max, is most delish. But how many things he actually catch? Well, let’s just say it’s no even match. 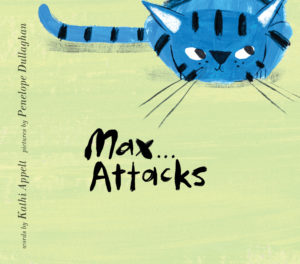 J: I’d like to start with ANGEL THIEVES. This is not the first time you’ve written about the “low country” of Texas. Please tell readers why this region speaks to you – and what it says.

K: It’s not that I enjoy mucking about in the soft, sucking mud amidst an array of stinging vines and insects, (not to mention the viperous crew). It’s that the swampier regions of Texas—to me, at least–feel somewhat primeval. When I’m there, I get this sense of the mysterious, of the ancientness of the place. There’s a kind of enchantment about it all that is hard to describe. The other thing to remember about these swampy locales is that they serve as huge nurseries. So, amidst what I think of as “darkness,” there’s this light-filled wonder too. I imagine that the goddess of Story loves it there, and so she’s generous with her ideas.

J: I love the multiple voices in ANGEL THIEVES. Do you have a favorite and why?

K: Achsah stands out to me, largely because I see her primarily as a mother. She’s based upon a real person, a woman named Sylvia Routh, who was enslaved by a ship’s captain. Upon his death, he released her from bondage, but he did not free the children he had with her. There are many ways in which I can’t identify with her, and I wouldn’t pretend to. Though we have a shared history of a place—Houston—that is where the similarities end, with the exception of being mothers. And it was Achsah the mother who compelled me to share her story. I understand her willingness to die in order to save her children. I understood her urgent mission. And it was important to me to convey the stakes to today’s readers. 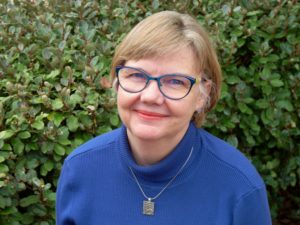 J: If you had to define the most important thematic idea in the novel, what would it be?

K: What I want readers to consider is the role of love, and how it presents itself in all its myriad forms, and how it can propel us to take risks—some of which aren’t exactly ethical. One of the questions I tried to present was “who are the thieves, and who are the angels, and what are their differences?” It’s a moral question that I hope they can consider as they move through the story.

J: You have a fairly extensive bibliography in the book. Do you have a favorite resource, and why?

K: True confession, the YouTube video called “Ocelot Attack” makes me so happy. I think I’ve watched it about a hundred times. There was also an amazing book that I intend to return to at some point, called Houston Bound: Culture and Color in a Jim Crow City, by Tyina L. Steptoe. In it, she describes Houston’s various neighborhoods in terms of race, ethnicity and interestingly as “sonic landscapes.” It took me right to my hometown and reminded me of my own growing up years there. Really, a wonderful book.

J: I love the small carving that Achsah carries. Can you describe its significance to you, and to Achsah?

K: Achsah’s talisman is the only gift she was ever truly given, so it has a unique power to it. She never even knew the name of the giver, but there was just enough love in the giving of it that it holds her up, and it continues to hold up her family as it transcends time. I try, with each of my stories, to consider the endowed objects that might bring some symbolism to the page. I also love the small figure in Achsah’s pocket.

If I had to sum up what I feel the whole book is trying to say it’s that “There’s love enough.”  In other words, it doesn’t take buckets of love to motivate, reassure, console, empower, save, or connect us.  Love has this huge power, regardless of the size of it. There’s always enough.

J: And now, MAX ATTACKS! I know you love cats (and your cats are the best) and I’m betting that Max is based on a real live cat. Is that true? 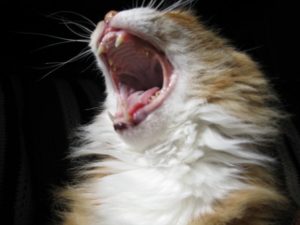 K: The Real Max belonged to my son, Jacob. Max definitely wasn’t blue, nor did he have a tail. He was a fire-red American Bobtail, and in his prime weighed in at over twenty pounds. He was notorious among our friends and family for attacking anything that moved, including fingers, toes and lower legs. Despite that, he was the best cat ever!

J: I love the fact that Max can’t hold onto one idea for very long – it’s so little-kid-friendly. Is that part of the inspiration?

K: Absolutely, and thank you for noticing that.

J: The illustrations are fabulous. Was the “hidden detail” (no spoilers!) your idea or the illustrator’s (Penelope Dullaghan)?

K: It must be Penelope’s because I have no idea what it is. (Challenge to readers!! Let me know if you find it!)

J: So many writers try to write rhyme before they’re ready. Do you think it comes naturally to you, or is it an effort (to this reader it feels effortless!) 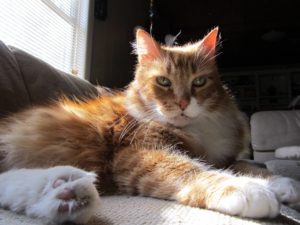 K: Nothing makes me feel smarter than a well-turned rhyme. I’m not sure that it comes naturally, but I don’t know what I’d do without my Webster’s Rhyming Dictionary. It’s my not-so-secret weapon.

J: Another book in the wings? Anything else you’d like to add?

K: I have a couple of projects going, but they’re in the very early stages.

Janet, thank you so much for hosting me here!  I so appreciate it.

My pleasure, Kathi, and readers – find the hidden detail!