In anticipation of the release of VOLCANO DREAMS, I want to spend a little time “in” Yellowstone National Park. In subsequent posts I’ll focus on the Park’s animals and thermal features, but this post will give you a cursory overview of the Park’s human history.

Yellowstone National Park was established in 1872 by Congress and signed into law as the world’s first national park by President Ulysses S. Grant. But long before it was a national park, the Yellowstone ecosystem was inhabited by Native Americans who lived with its extraordinary natural features and unique animal life.

As long ago as 11,000 years prehistoric peoples lived in the Yellowstone region, as evidenced by dated projectile points. When Native American peoples began to coalesce into tribes, Shoshone, Blackfeet, and Bannock were among those that traversed the region. The Shoshone gathered obsidian (a volcanic glass rock), known for its ability to be honed to a knife-sharp edge. The Tukudika harvested the bighorn sheep and became known as the Sheepeaters. The Kiowa tradition says that their creator gave them Yellowstone at a hot spring in the Mud Volcano area. Other tribes – Crow and Piegan – also have strong associations with the region, and even long after the arrival of Europeans Native Americans have lived in and around Yellowstone. Altogether 26 current tribes have historic connections to Yellowstone. 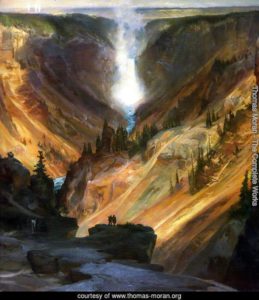 Thomas Moran’s painting of the Grand Canyon of the Yellowstone

The first white men to arrive, in the 1700s, were traders and trappers following the world’s appetite for fur. These early visitors described a hellish scene of “brimstone and vapors” so bizarre that the tales were laughed away. As the fur trade was replaced by mining and lumber, the stories spread until the region was explored more formally by others including the Washburn expedition. Public lectures followed that expedition and shared that the tales of the remarkable beauty of Yellowstone were no exaggerations, and this prompted requests for funds from Congress for further exploration.

An 1871 delegation headed by Ferdinand Hayden included the landscape painter Thomas Moran, whose paintings are still some of the most famous and beautiful representations of the Park. Preservation of the region itself was promoted by Hayden, and thus the generation of a new idea: creating a protected area for public enjoyment, our first National Park.

After further exploration and the essential development of roads and trails, early public touring of Yellowstone followed, though the tours were primitive by today’s standards. The west was still wild and untamed and attacks from bands of “hostiles” and robbers were possible at any time. The construction in 1883 of the big, out-of-place National Hotel at Mammoth Hot Springs, with a capacity of anywhere from 300-500 guests, opened a new era. 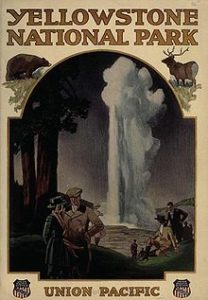 Stagecoaches carried passengers through the Park to a tent camp at the geyser basins near Old Faithful. Visitors bathed in the hot springs (not only dangerous, but today strictly forbidden as it damages the fragile thermal structures). “Sagebrushers” roughed it by camping in their own tents in the wild, and “dudes” spent their days with touring companies and their nights in the hotels that were built to accommodate, including the gorgeous Old Faithful Inn, opened in 1904.

If you want to read more about the history of Yellowstone, my favorite resource is Aubrey L. Haines The Yellowstone Story: A History of Our First National Park, published by the University Press of Colorado. I’ve created a Pinterest page with some of my favorite images, which you can find here.

Follow along – next week I’ll begin a discussion about the unique wildlife of the Park.