The American west is rich with wildlife. But some of America’s most interesting animals can only be seen easily in Yellowstone National Park because they are now concentrated in that ecosystem. Plus – visitors can drive through the Park from dawn to dusk and observe even from roadsides animals that are otherwise not visible to humans. 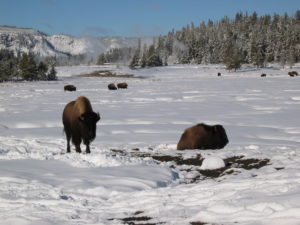 Here are just a few of the animals you might see:

Elk are numerous throughout the Park. They like to concentrate around the hot springs at Mammoth. Mountain goats are often seen at the highest elevations, like the slopes of Mount Washburn. Bald eagles can be spotted soaring or sitting above the rivers, searching for trout.

Many animals congregate in the Lamar Valley along the north end of the Park – which conveniently is open to cars all winter (unlike the rest of the Park in winter which is only open to snow vehicles.) Because two of these animals – bison and wolves – have interesting histories, I’m going to concentrate in the rest of this post on the American bison, or buffalo, and next week I’ll talk a bit about wolves. 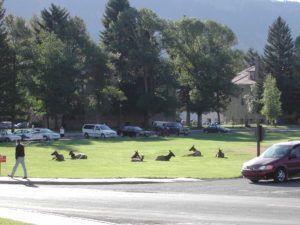 Elk on the lawn at Mammoth

When Europeans first arrived in America there were large endemic herds of American bison. Bison have been here since prehistoric times, grazing in huge herds in the open prairie lands. By some estimates, 20 to 30 million buffalo once roamed the plains of America, mostly west of the Mississippi. Some say that there were so many animals they occupied every square inch of land for as far as the eye could see. They were hunted on horseback and on foot by native Americans who harvested them for food, clothing, and shelter.

Sadly, buffalo were easy targets for Europeans with firearms, and by 1900 they were nearly at extinction, with only 300 animals remaining in the entire country. Some travelers shot buffalo through the open windows of trains passing through the plains; there were so many animals no one realized the extent of the slaughter until it was almost too late. The near extermination of the buffalo was also partly responsible for the degradation of living conditions for many native American tribes, especially Plains Indians, who relied on the buffalo for survival.

Fortunately for the buffalo, a few animals were held in private hands, and conservation efforts in the early 1900s concentrated on bringing animals back into Yellowstone. A small herd of genetically pure animals was held in the Mammoth area until the population stabilized. As a result, today almost 5000 American bison roam freely throughout the Park, and it is almost a certainty that if you visit Yellowstone, you’ll see buffalo. They are magnificent and impressive animals, our national mammal.

But, please! These animals, while they look like large – very large! – cows, are extremely dangerous, as dangerous as a grizzly if you get too close. They are ill-tempered and defensive and can gore or trample the unsuspecting tourist. Enjoy them from a safe distance and think about the tens of thousands of years the American bison has been a part of this beautiful landscape.