Recently I watched one of my all-time favorite movies yet again, A Knight’s Tale with the late Heath Ledger. I love it for its quirky characters, its wry humor, its evocative dialogue, its historical twists, and its way of making history relevant by the use of contemporary music. But I also love the way the screenplay unfolds the story.

Many beginning writers (*raises hand*) make the mistake of starting too far back in the story. That is, “once upon a time, a girl was born…” and we watch said character go to school, brush her teeth, and suffer her backstory wound, all in time-linear fashion, until the real story starts when said character is sixteen. A story like this is usually as dull as toast and rarely publishable. The best stories begin not at the beginning but with an incident that sets the main character in motion to the inevitable end. 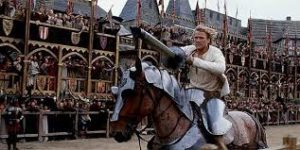 It is, however, necessary for audiences to understand how your character got to that inciting incident. So how does one layer in backstory? Let’s look at A Knight’s Tale for a great example of plotting backstory. (And I highly encourage you to take a look at the movie if you haven’t already.)

Our hero, William (Ledger), enters the story as the squire to a knight. We have no idea how he got there, but it doesn’t matter – until later. What matters up front and is information we are given is that he’s not noble-born, but goes into disguise as a knight, which takes him from jousting tournament to tournament. Being in disguise is his story problem, and leads to the climax, which I won’t reveal here.

When do we see the first of his backstory? We get a small glimpse about 1/4 of the way into the movie when we hear the revelatory thematic phrase, “It’s possible for a man to change his stars,” meaning someone who begins life in one way can end it in another with effort, persistence and a little luck. In this first glimpse, we’re given a short scene of a very young William with his father, who first plants the seed of “change your stars.” We also see swift and subtle hints that this is a challenging goal to attain.

But we don’t know the entire story for a long while, until William and his crew are on their way to London for the first time in many years. Then the full backstory of William’s engagement as a squire and his departure from home is revealed in a longer flashback. This moment comes right about or just after the 1/2-way mark of the movie. From this point we understand that William’s departure from his father was both good and important (“change your stars”), but also emotionally difficult (his wound).

In short, we’re given a glimpse of William’s past and backstory wound when we need it, and not a moment sooner.

The transitions between these flashbacks and the story present are also perfectly executed, especially the second flashback in which William recalls his first childhood ferry crossing – leaving London and his father at night – when he is crossing back to London after many years.

When you need backstory to explain a character’s behavior, to illustrate their wound, or to enrich or deepen the theme and/or hero’s journey, consider placing flashbacks in your story after you’ve set your character on their path. Keep the flashbacks short and transition them in and out in a way that feels natural. Your story will have more energy, and your reader will be drawn into the expectation that you’ll reveal important information when the time is right, and not before.