The Charmed Children of Rookskill Castle is set in Scotland for a number of reasons. First, the magic “lives” in a chatelaine (you can read more about that in my previous post) that is a European jewelry. Second, it felt right to place the children in a castle, with its dark, spooky corners, large scale, and ghostly history:

The castle loomed out of the fog at the end of the winding lane, after what seemed an age. Kat sat up straight, and Peter let out a low whistle. 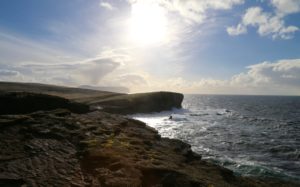 It was much bigger than the picture had made it seem, a real castle with many turrets rising up through the gloom bit by bit, and it did look the sort of place that would house ghosts.

And third, Scotland is rich with magical history, from old tales to Celtic traditions to folkloric animals. Here are just a few of the latter. 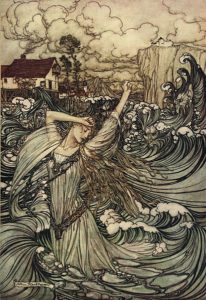 Selkies are human-to-seal-and-back-again creatures. Most selkie stories are tragic love stories in which one of the lovers turns into a seal and must return to the sea, and cannot reunite with its human companion for seven years. In some tales a fisherman falls in love with a selkie only to lose her. The proximity of ocean to most of Scotland accounts for this and the many other magical creatures (waterhorses and sea monsters) attached in some way to the sea.

Changelings are creatures left in the place of a human infant. Usually elves or fairies were the culprits, taking the infant from her crib and replacing her with an ill or disabled child, or a disguised fairy child. A changeling child was often used as a way to explain sudden disease or developmental disability, with the result that the changeling could be left to die without guilt, and the assumption was that the real baby was living with the fairies. Sometimes a charm – such as an open pair of scissors left by the crib – was used to ward off the child-thieves.

Brownies are tiny creatures wearing brown clothing and looking like a little old man covered in curly brown hair. Brownies were usually helpful household creatures, working at night in secret in exchange for gifts of food, and living in attics or walls. Manor houses often kept a chair by the fire for use only by the brownie. It’s pretty certain that J.K. Rowling used the brownie myth as the basis for her “house elves” in Harry Potter. 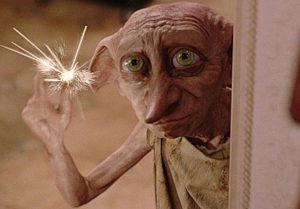 Being familiar with the rich heritage of myths, fairy tales, and magical creatures that defines the world’s cultures is a sure way to add depth to stories set in those cultures. Since I’m of English-Scots-Irish descent, I felt like I was tapping into my roots when I visited the U.K. and borrowed some of its mysteries for The Charmed Children of Rookskill Castle.