In the previous post, we reviewed the machines of war that influenced my novel. In this post, something about clocks.

In The Charmed Children of Rookskill Castle, Kat Bateson is a logical girl who idolizes her father. His hobby is clock-mending, and Kat spends her time with him learning about the inner workings of clocks, including the moment when he lets her help with a clock repair:

Her hands had trembled a little as she started, but after she’d disassembled the first layer of the works she grew bolder, and her father watched her, interjecting only a little. She’d cleaned and oiled the parts, and reassembled them, tightened the screws and adjusted the balance, and then set the clock to running. It gave a satisfying tick-tick. 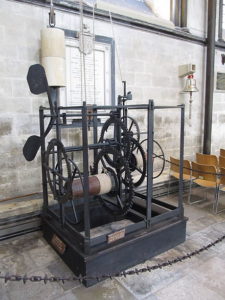 Kat’s skill with clocks is a crucial element in the story.

Mechanical clocks may be an anachronism in the age of streaming time and digital watches, but they are also satisfying – and are resonant with meaning. Time travels in one direction. Time waits for no one. Time can be your friend, or your enemy. 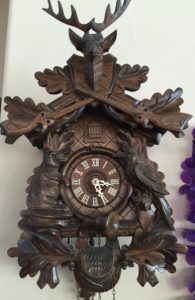 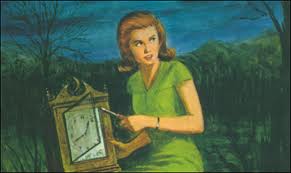 Nancy Drew and her clock

I love clocks. Our family has made a collection of clocks over many years, some inherited and some we’ve picked up along the way. All are mechanical, some chime, some just tick – and one, in my office, is a cuckoo clock, which can drive our guests crazy.

One of my favorite books as a kid was Nancy Drew and the Secret of the Old Clock. I wonder now if it had a subconscious influence on my work. As a writer, I love playing with the concept of time, and what better way to suggest this than to use clocks in The Charmed Children of Rookskill Castle both physically and metaphorically?

In my next post, I’ll talk about the inspiration of jewelry.