I’m so pleased today to welcome my friend – and critique partner – Kent Davis. Kent’s debut middle grade novel, A RIDDLE IN RUBY, is out now and is a terrific page-turner, imaginative and loads of fun.

Here’s the description from his publisher, Greenwillow Books: “Ruby Teach, daughter of a smuggler and pirate, has been learning how to swindle and steal and pick the most complex locks for as long as she can remember. But a collision with aristocratic young lord Athen sends her spinning into chaos. Little did she know that her whole life has been spent in hiding from nefarious secret societies and the Royal Navy . . . who are both now on her trail. In this debut middle grade adventure, Kent Davis weaves a rip-roaring tale through an alternate colonial Philadelphia. A world where alchemy—that peculiar mix of magic and science—has fueled the industrial revolution. With this highly original setting, a cast of fully rounded characters and rapid-fire, funny dialogue, A Riddle in Ruby will call to mind fantasy greats like Diana Wynne Jones and Terry Pratchett.” 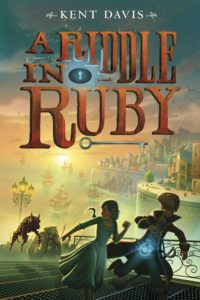 You’ve created a fascinating world. I know you were inspired by an image that popped into your head. Can you describe it, and tell us a bit about how it guided your research and the direction of the book?

Sure! Well, believe it or not, this all started out with that image: a girl in a tricorne hat in a barrel with metal ostrich legs. Not the most heroic image, I’ll grant you. But it stuck with me and eventually I had to investigate. I mean, that picture would just not shut up! So from there I wound my way into an alternate history Colonial America (tricorne); a brave, impatient, apprentice thief full of pluck and gumption (girl), and magic that sums up as high-end chemistry that you can give a nudge with your personal mojo (ostrich legs): cobalt gearbeasts, alchemical automatons, living purple goo. You know, standard kind of stuff.

Ruby is a great character, very three-dimensional. Do you have any favorite ways of getting into your characters – any techniques that help your process?

Thank you! I do, actually. My professional training is as an actor and improviser, so a big part of my process is creating extremely difficult emotional or physical obstacles, then plopping the character down in the middle of the troubles, plopping myself into their head as an observer, and then just watching how the heck they’re going to try to get out of this one. To your point about three dimensions, I love characters that fail before they succeed. Failure is how we learn to fly, and the more spectacular failure, the better! 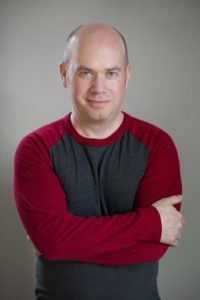 This plot really moves. Is that fast-paced plotting something that comes naturally to you or is that a result of revision? Do you tend to cut more or add more – or both? And…are you a pantser or a plotter.

I have to cut! I think the original manuscript to the published version is lighter to the tune of about 20%. More than that, though, I try to think of each chapter as a mini-play, and momentum is as important to me on that narrower level as much as it is in the grand scheme. My goal is to hopefully end each of those little plays in a way that propels the reader forward!

I’m so happy that Kent came by! Here’s where you can find a copy of his book: Country Bookshelf, Amazon