Mary’s ball had been the last debut of the season, held on an August night that began so hot and still, even the flies seemed drunk with stupor…Lightning flickered on the far horizon, echoing the tiny lights strung from branch to branch in the gardens outside. Page 27, FAITHFUL

My previous post discussed the fashion and food of 1904. Another fun aspect of researching historical fiction is discovering the social norms of past times. Social life in 1904, the time period for FAITHFUL, was vastly different from today’s social norm. The most important a 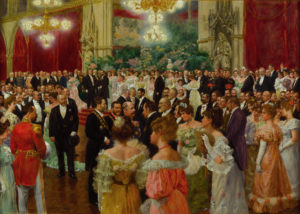 spect of that difference: the formality of society in the early twentieth century.

A seventeen-year-old girl from the upper end of society like Maggie would already have begun thinking about marriage. She would have been preparing for her debut – her introduction to her peers and elders as a marriageable prospect. A proper debut was every girl’s dream, as she selected her adult wardrobe and cast aside more childish clothing styles. Of course, she also would now wear a corset, a most miserable contraption. A girl’s debut would include parties and balls, and especially one thrown by her parents – a very glam affair.

A girl’s suitors would be less interested in love than in her social and financial standing. American girls whose fathers were industrial giants – who had made fortunes in the railroad or banking industries – were often sought by European bachelors who were land and title-rich but cash-poor. (The story line of Downton Abbey features this thread in the marriage between Robert Crawley and his American wife Cora.)

Maggie would be expected to behave with certain constraints. She would not be permitted to spend time alone with a man in a private place; she’d be expected to ride a horse side-saddle; she’d wear a hat and gloves when out. Her education would be completed by seventeen or eighteen. She’d be expected to go “calling” on her upper crust neighbors each afternoon, and to receive “callers”, who would leave calling cards on a silver tray at the house entrance. And, of course, a woman couldn’t vote in the United States until the suffrage law passed (see here for that discussion) and women really had no rights at all. 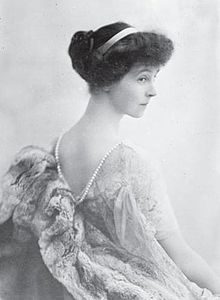 In the lower classes of society, a young girl would either find factory work – grueling and poorly paid – or if she was lucky, would go into service as a ladies’ maid. Maggie would have needed a maid to help her dress and make up her hair, and to keep her clothing clean and in good repair. It was generally impossible for a girl from the lower classes to ascend to upper class status – marriage between classes was unthinkable.

This rigid caste society dictated everything from what a girl could eat, to what she could say, to those she could spend time with. Her marriage would have been almost arranged – that is, she would have only been able to choose from a select number of suitors, and love was not a high priority. (It’s said that Consuelo Vanderbilt sobbed throughout her wedding to a man she did not love, as she was forced to leave behind her true love.)

An upper class girl would want for nothing. She’d have beautiful clothing, jewelry, and a lovely home. But a lower class girl could make her own way – including marrying for love, if she was lucky.