In April 1906, following the great earthquake (for more on the earthquake, see my previous post), numerous fires broke out all over the city of San Francisco. The city had recently installed gas and water mains, and these ruptured during the quake, so the combination of explosive gas and no water made for a volatile and horrific situation. 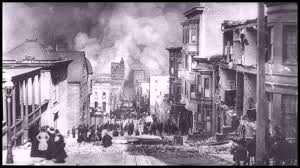 One of the first and largest fires was started by a woman trying to cook breakfast for her family after the quake, and as a result it earned the nickname “Ham and Eggs Fire.” Other fires were started by firefighters using dynamite to create fire breaks. The downtown area was engulfed in a blazing inferno.

The weather was warm, windy, and dry, and the fires raged for four days until rains came. More than half the population of the city was displaced, and refugee camps remained in place for up to two years. 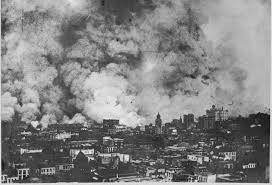 Most of the destruction resulting from the April 1906 catastrophe could be attributed to the fires rather than the earthquake itself. The price tag in today’s dollars would run into the trillions.

Here’s how Kula, in FORGIVEN, describes the fires that followed the earthquake: 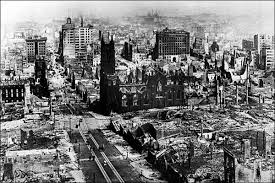 All day and into the night Thursday, the east side of San Francisco burned. It burned hot through the vile, mean streets of the Barbary Coast, sending hundreds of miserable alleys to the heavens as a pillar of smoke.

The fires burned through Market and destroyed the Grand Opera House, where I had seen Caruso sing just two nights ago, and the Palace Hotel, where he slept…all his costumes were lost. Not even the rich and famous were immune to the flames.

Perhaps the only positive note was the response of people on the street following the disaster. The community rose up together and vowed to rebuild. Even those rendered homeless displayed great kindness, and the gap between rich and poor disappeared for a time as all suffered together. 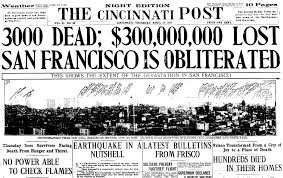 It’s only a matter of time before another great quake occurs on the San Andreas Fault.