Over the next few weeks I’m running  a series on San Francisco at the turn of the last century, culminating with the Great Earthquake of 1906.

My novel FORGIVEN is set in San Francisco in 1906. Here’s how I describe the city as Kula finds it: “The Spanish named San Francisco for a saint. The Celestials met their Demons on its streets. Called Golden Mountain by those in the Middle Kingdom, it perched precarious on a cracking plate. Children’s sad eyes pleaded in the stench and filth of its tight alleys, where hawk-nosed men slithered and the unwary were shanghaied. San Francisco’s gilded halls and palatial homes held wealth beyond dreams. For some, it was a prison. For some, it was release.”

The port of San Francisco

In early 1848, Captain John Sutter, who had established a colonial holding in the Sacramento Valley, built a mill on the American River. The flow of water from the mill exposed a vein of gold, and by the following spring the first of tens of thousands of prospectors passed through San Francisco’s Golden Gate en route to the California gold rush. Development of the city followed out of dire necessity. And the very nature of the grizzled prospectors and the constant exchange of vast fortunes gave the city a bipolar air of wealth and desperation. 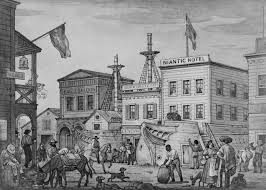 een more than a little creepy).

San Francisco was first a seaport, with all that a constant turnover of sailors brings. The neighborhood of the Barbary Coast – so nicknamed after an infamous stretch of coastline in Africa – was home to corruption of every kind.

The wealthy of San Francisco naturally settled the hilltops, in particula

r Nob Hill, so named after the rich “nabobs” or “nobs” who built large mansions there. Cable cars, an 1873 invention of Scots immigrant and mechanical engineer Andrew Smith Hallidie, connected the growing neighborhoods and steep hills in this “Paris of the west”.

Chinatown grew in response to the influx of Chinese immigrants, who were encouraged to work on the railroads and were given property rights in Chinatown.

Golden Gate Park was established in the 1860s, and the famous Sutro Baths and Cliff House built on the coast attracted tourists on day outings eager to watch the seals that lounged on the rocks.

The gold rush created the city and led to profound social and economic disparities, but the 1906 earthquake changed the face of San Francisco and altered her history. In upcoming posts I’ll visit in more detail the Barbary Coast, Chinatown, and the earthquake of 1906.

First up: the Barbary Coast.