I’m thrilled to be able to introduce Jacqueline West, the New York Times best-selling author of the gorgeous series, The Books of Elsewhere, and her newest release, A Storm of Wishes! Check out that extraordinary cover. And this sounds like a fantastic read, which will very much top my TBR stack. And…check out her fun fact at the end of this interview. It’s really awesome.

Sure! Here’s one of the official ones:

It’s been only a few weeks since Van uncovered a magical secret—that wishes really can come true, and that a mysterious society called the Collectors protects us from the dire consequences even the smallest wish can have. Van knows only too well how wishing can go awry: his mother is recovering from a broken leg, his friend Pebble has been stolen away by the evil wish collector Mr. Falborg, dozens of dangerous creatures called Wish Eaters have escaped into the world, and Van himself has almost died—twice—all because of wishes. 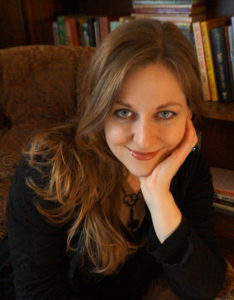 When Van’s mother is offered a position at the renowned Fox Den Opera, located in the quiet, beautiful forest a few hours north of the city, she whisks Van away with her, hoping this will be a safer home for their family of two. But Fox Den is home to an ancient Wish Eater—a powerful creature with the ability to grant wishes that have catastrophic consequences; a Wish Eater Mr. Falborg would love to get his hands on. Van must team up with the Collectors and find a way to stop him before he makes a wish that leaves the world in chaos.

Oh yes, this is very much a sequel. It picks up right where THE COLLECTORS left off, it features the same major characters, and it answers many—if not all!—of the big questions that remained at the end of the first book. The big difference here is the setting. THE COLLECTORS takes place in a large American city and the hidden, magical underworld beneath it. A STORM OF WISHES moves from that city to a deep forest, where secret mansions and ancient wishing wells wait within the trees.

I’m not sure I have a favorite age to write for—which is probably why I do it all! I love being able to move from one project to another and to find myself somewhere completely different with each one; it helps keep me from getting stuck. 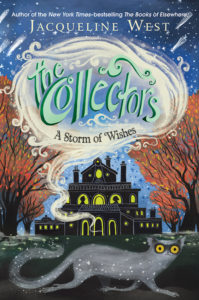 The same goes for poetry and fiction. For years, most of what I published was poetry, and now I spend most of my time on fiction—in part because I love the challenge of the novel, and in part because I have deadlines! But I know that my work in poetry informs my fiction. I think about the sound and rhythm of each sentence, and I tend to go overboard with figurative language.

Genre-wise, though, I’m a fantasist. Almost everything I write could fit under fantasy’s big umbrella, whether it’s fantasy/mystery, fantasy/horror, fantasy/adventure/humor… Even my most realistic fiction slips into magical realism. I love how fantasy removes the limits of the real world. It’s so freeing to get to play with worlds where anything can happen.

I’ve got a couple of creepy YA novels on the back burner, and I’m more than halfway through drafting my next MG dark fantasy/mystery. It doesn’t have a title yet—those never seem to come to me until the very end—but it involves a very small, very old town, a library full of secrets, and a book that may not actually exist.

I have a form of synesthesia, so to me, each letter of the alphabet has a color, and every word is a combination of those colors. When I’m choosing character or location names, I often take their colors into account. Certain characters need names that are full of dark, mysterious colors; others might be mostly pastels or bright reds and yellows. Of course, nobody knows this color code but me…which is probably a good thing, or it might give away which characters can be trusted! 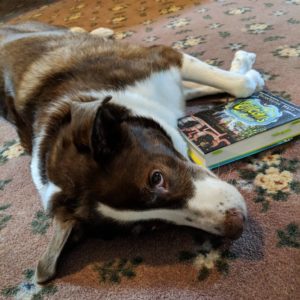 And yes, I do have a pet: a giant, bouncy springer spaniel/border collie/beagle mix named Brom Bones. We got him at Halloween ten years ago, and he was very bony at the time (he’d been in a shelter for weeks), and he reminded us of the “wild, unruly hero” from The Legend of Sleepy Hollow—one of my favorite Halloweeny stories. Washington Irving describes his Brom Bones this way: “He was always ready for either a fight or a frolic; but had more mischief than ill-will in his composition; and with all his overbearing roughness, there was a strong dash of good humor at bottom.” That’s our dog to a T.

Jacqueline West is the author of the NYT-bestselling series The Books of Elsewhere, the Schneider Family Honor Book The Collectors, and the middle grade mystery Digging Up Danger, as well as the YA novels Dreamers Often Lie and Last Things.  Her debut, The Shadows (The Books of Elsewhere, Volume One), garnered multiple starred reviews, was named a Publishers Weekly Flying Start and a Junior Library Guild Selection, and received the 2010 CYBILS Award for fantasy/science fiction. An award-winning poet and occasional actress, Jacqueline lives with her family in Red Wing, Minnesota.

3 Responses to “A Storm of Wishes by Jacqueline West”