In the last couple of posts I told you that when you are in Yellowstone, you are inside a volcano. But you wouldn’t know it. And that’s due mostly to one simple thing: erosional processes. 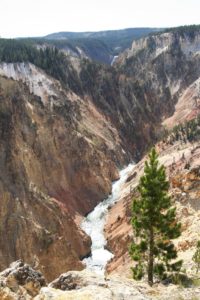 Note the “yellow stone” exposed in the Grand Canyon.

The earth isn’t static. Gravity plays a huge role in how the earth looks, as do water and temperature fluctuations. Landslides, rockfalls, sinkholes, and so on are all aspects of erosion. Glaciers once rolled over the landscape and carved deep valleys. Because we are on a planet that experiences wide changes in temperature and rainfall, we witness what those processes do over vast time scales to change the way our earth looks.

The huge Yellowstone caldera, which is roughly shaped like a bowl, is formed by a combination of collapse (of the volcano as it cooled) and erosion (of the edges of the caldera over time).

Erosion is a continuing process that you can witness in real time, every time you see a stream or river, or witness a heavy rain. 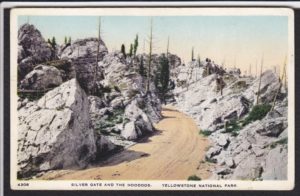 At the end of August, I’ll be announcing a giveaway for teachers and librarians that will run the month of September. In the meantime, I’d like to announce that I’ll be in Yellowstone, so if you happen to be there, please come by!

And signing in Old Faithful from 11AM to 3PM on August 24.

I’ll have bookmarks and other swag. See you then!

2 Responses to “But It Doesn’t Look Like A Volcano!”