Humans have a complicated relationship with wolves. They may be ancestrally related to man’s best friend, the dog, but… Wolves are variously described as scary, beautiful, intelligent, cagey, dangerous, and fascinating. The gray wolf is the top predator in the Yellowstone ecosystem, and has been the bane of ranchers and farmers since Europeans first came to the region with sheep and cattle. We love to watch them play outside their dens in Yellowstone National Park, but we don’t want them in our back yards or our herds.

Early in the last century, gray wolves in the states around Yellowstone were almost exterminated and were in danger of extinction. Protections covered those that migrated south from Canada, but those that did migrate did not establish thriving packs in the northern U.S. In the 1970s wildlife biologists began to explore the idea of reintroduction of wolves into the Park. For one thing, biologists recognized that the populations of the wolf’s primary prey species (deer and elk) had exploded, and that huge and now unmanaged population was damaging fragile streams and rivers. Balance in nature is important, some would say vital, and wolves provide balance. 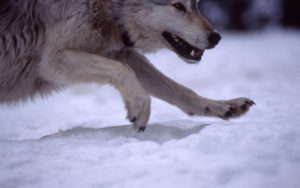 The reintroduction of the gray wolf did finally begin in 1995. Wolves were held in pens in the Lamar Valley on the northern edge of the Park until biologists were satisfied that releasing them into the wild would be safe for them and that they would remain in the Park, lessening conflict with humans. Since their reintroduction wolves have established a number of thriving packs both within and outside the Park, and while there have been a few negative interactions, the efforts of wolf biologists and other groups have gone a long way to mitigating problems.

I’ve had the good fortune of seeing wolves in the wild. They are beautiful – and scary (though they are not the most dangerous wild animal in North America. That distinction belongs to mama moose!) They generally 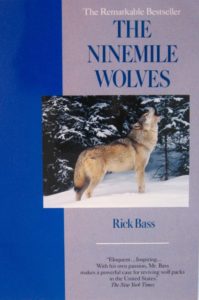 stay away from humans, but hearing their song on an evening wind is spine-tingling. If you go to Yellowstone, be sure to spend some time either early in the morning or late in the evening in the Lamar Valley, where the wolves still congregate and den. If you see a large group of people with spotting scopes, they are surely watching wolves.

Two of my favorite books about wolves are Rick Bass’s THE NINEMILE WOLVES, and Thomas McNamee’s THE RETURN OF THE WOLF TO YELLOWSTONE.

It’s interesting to note: both bison and wolves were hunted nearly to extinction and brought back by the efforts of concerned biologists. Today, both animals rank highest on the list of animals that tourists wish to see when visiting Yellowstone National Park.