If you know me at all well, you already know that I’m an avowed pantser. (If you don’t know me, or don’t know what a pantser is, it’s a writer who “writes by the seat of her pants”, i.e., organically.) I hate outlines and I love spontaneity. I love the open-ended response to “what if…?”

Some of my many drafts and notes……….

If you know me at all well, or have read this post, you also know that I’ve been wrestling with this latest novel, and it’s been one of the toughest “fights” of my writing career. Nothing seemed to feel right, no matter how many revisions I wrote nor how many directions I took. I axed scenes. I swept characters off the page. I killed so many darlings I should be under arrest. None of my efforts resulted in something I was happy with, much less could be proud of.

I had to take drastic, desperate action. Which meant…making a plan.

But here’s the catch. I couldn’t bring myself to make a detailed outline, even with this mess. I needed direction and focus, not constraints that would make me hate the work. I needed to understand deeper motivation and theme, I had to expand my character analysis, and I wanted to be certain that the plot was not only clear but also included the twists and turns that I love to incorporate in my stories.

So I wrote a “treatment.” It’s the kind of thing that filmmakers write as they are about to begin storyboarding. 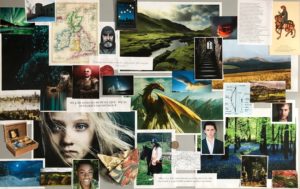 I also created a “mood board” which helped me visualize.

I began at the beginning, with the kind of deep backstory that we usually have to lop off the front end of our first drafts. This was the “once upon a time” stuff that dug back at least a generation before my protagonist was born. I set up the inevitable internal family conflicts that would lead to my true beginning and my protagonist’s struggle. I wrote the backstory for my antagonist so that I could understand his motivations.

Then I rewrote my actual story in a short, narrative form, in summary but including emotional impact. I made sure to summarize each character’s motivations and behaviors, but without trying to be literary or put any material in scene. I ended with a short summary of “afterward.”

The entire treatment came to 13 single-spaced pages and took me about two weeks to write and revise. From this, I was able to craft a revision that was tighter and yet fluid.

I think writing the treatment has resulted in a far better story, and allowed me to “pants” like I love to do, while adhering to a map that illuminated the way forward. Better yet, I was able to share this treatment with my beta readers and my editor, and get a thumbs up and/or suggestions for improvement.

Will this technique result in a story that stands the test of time? That remains to be seen – but I feel far better about this draft and its future than I did before. If you are a panster struggling with an unruly draft, you might consider this method of bringing your words to heel.

In fact, I’m going to try it with my next novel, even before I begin the first draft. I’ll let you know how it goes!