Today I’m delighted to introduce fellow Montana author Stephanie Pitman, and her debut YA novel HONORABLE DISGRACE, just out. It’s a deeply personal account of a traumatic experience, which I believe is important to discuss. Like Laurie Halse Anderson’s SPEAK and Jay Asher’s THIRTEEN REASONS WHY, Pitman recounts the story of a girl experiencing rape and carrying the shadows of guilt and self-loathing.  Here’s the synopsis:

“Angie Adams joins the powerlifting team her junior year, but she has more in mind than just toning up—like getting closer to her crush, football star Cory Jacob, who, as luck would have it, is assigned as her spotting partner. When Angie’s feelings are unexpectedly returned, her life is suddenly filled with the giddy electricity of first love. But why, then, does Angie get a little flutter when her older and very hot boss, Brad, looks at her?

Angie seems to have everything going her way, until her world is torn apart by her sister’s betrayal which leads to a brutal rape. Heartbroken and reeling in the aftermath, Angie has to find an internal strength to rival her record-breaking power lifts if she ever wants to feel worthy of love again.”

Congratulations, Stephanie, on the publication of your novel, HONORABLE DISGRACE. Can you tell us a bit about the story and what inspired it? 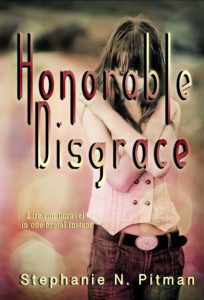 Thanks, Janet. I am very excited.

Well, I never intended to write Honorable Disgrace and that is mainly due to the fact it is based on an experience I had as a teen, one I felt very ashamed of. When I was sixteen, some poor choices from my older sister put me in a situation where I was raped. I personally felt it was my fault, that I had sent signals to my sister or to the guy, who was someone I had met before, to make them think I wanted that type of attention. The burden of that I kept to myself along with the deep feelings of betrayal. I never told my sister what had happened and only ever shared what happened with a couple friends and later my husband. As life moved on, I really felt I had gotten over the ordeal. But about six years ago I began having nightmares. I was already a writer, so I turned to writing for therapy and it evolved to what it is now. Angie, the main character in Honorable Disgrace, faced similar burdens but she faced them how I wished I’d had the courage to face them, and she realized much sooner than I did, that she was still of worth to others and in return worthy of receiving love.

Wow. Such a compelling story, and how brave of you to step forward and write it. I imagine that bringing this to the page was a huge leap. How long have you been writing for children/teens? Have you written other books or is this your first effort?

I began writing for children the year after my oldest son was born, so I’ve been at it about 12 years. After my first attempt at a picture book (which I still have plans to revise and get published) I found my true passion was writing for young adults. Like I mentioned, I do have a PB book completed, or so I thought it was at the time, and I have several other works in progress. But Honorable Disgrace is my first published work.

Can you describe your path to the publication of HONORABLE DISGRACE?

I touched on it in my earlier comment, but my path with Honorable Disgrace began when I realized my journal writing had the potential to be more than just therapy for me, that it could help others dealing with a similar tragedy, and that even if I only helped one person through my efforts, the time and struggle to get my book written and published would be worth it. It helped me to deal with my feelings and inspired me to forgive my sister for her part in my rape. She would have never knowingly put me in that situation. 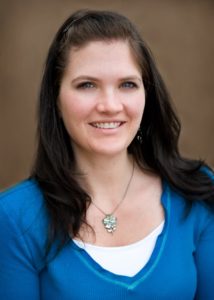 It took me about 6 months to write, but there have been many revisions along the way. I’ve had a lot of wonderful ladies read it and give great critiques. Fantastic editing help by Jayne Pilimer. She’s awesome. Through SCBWI conferences I met many great agents and editors, Jayne was one, and though I did receive rejections from some of them, it only inspired me to make Honorable Disgrace better. Overall the whole process of writing and getting to publication took about 5 years. I do not plan on it taking that long for my next book.

Do you have any advice for beginning writers?

Most people have a story to tell, but only those willing to do the work will ever be published, so set goals for yourself, find ways to stay inspired and make the time to write. If you want to be a writer, write. The only thing that is second to that is to read.

That’s terrific advice. Can you tell us something about your personal life – inspirations, plans for the future, goals, etc.?

I am a mother of two boys and wife to a great man. They inspire me in so many ways. They make me want to be a better mom and a better wife, so that much said, I guess you could say one of my goals is to find ways to do that. Listen more, talk less, set my time aside for them more and make memories, instill in my boys a passion for life and pursuing their dreams. And I want to grow old with my husband.

I also love to challenge myself and have done a lot of running races, relays and a few triathlons in the past few years. My son, Patterson, and I made a resolution at the beginning of this year to run at least one race each month this year and one of those races we plan to do a half marathon. It will be my second, but his first and they are tough. I also plan to do another relay race which consists of 12 people on a team, running a 180 mile course in as little time as possible and once you start, you don’t stop. There is someone running all day and all night and well into the next day. It’s amazing. I could go on forever about my goals for challenging myself physically, but I’ll end with my crazy dream. So far all the triathlons I’ve done have been sprints for beginners. 1000 yard swim, 12 mile bike, and 5K run, but I’d really like to do a full Olympic distance, which is usually double the sprint and maybe someday, long down the road, I’d love to do the Kona Ironman.

For writing, I plan to have another book near completion in a few months and getting ready for publication by the end of this year. And to get at least one book published each year until I run out of ideas. I’d really love to be a full time writer, but that may have to wait until I get a few more books under my belt.

Do you have any new writing ventures underway?

I have quite a few. My current WIP is a standalone YA set in current day Paris. 17 year old Aubrey discovers a key which uncannily unlocks her past where she discovers her reincarnated self who she has to rescue to save her future. And of course along the way she finds intrigue, adventure, danger and love.

I also have a trilogy based on Mayan Gods in the mountains of Montana (I’m halfway through the first book), another fantasy about a fairy godmother with a completely new yet-to-be-done twist, my picture book revision and at least three more.

Wow! Such interesting projects! Do you have a website where readers can learn more about HONORABLE DISGRACE?

I do. It is www.literarypitstop.com

I feel honored for your time, Janet, and I thank you for the opportunity. I admire you as an author and am privileged to know you.

You are so sweet! I wish you all the best!

You can also find Stephanie on Facebook and Goodreads.

2 Responses to “Interview: Stephanie Pitman and Her Debut HONORABLE DISGRACE”