“Have you been eating ice cream again?” asked his mom. “You know what that does to you.”

“No,” said Dudley Dragon. “See?” And he blew a flame just to show her his fire hadn’t gone out.

“Hmm,” said his mom. “All the same, your fire looks a little blue. I think you’d better rest.

Dudley felt so bad that he didn’t argue. He curled up on his pile of plundered gold and went to sleep.

When he woke in the morning, his mom took his temperature. “Oh, dear,” she said. “Your temperature’s too low. No school today.”

“And your nose is all stuffed up! This is bad!” His mom backed out the door in such a hurry she tripped over her tail. “I’ll make you some nailhead soup. Try not to sneeze!”

Dudley felt the tickle start in his nose. He tried and tried not to sneeze, but… “Achoo!” Flames came shooting out of Dudley’s mouth!

Up went an ax handle in a puff of smoke.

Dudley held up a tissue, but the next sneeze burned it to a cinder and singed several suits of armor.

“I’m here, dear,” said his mom from outside the door. “Aim away from your favorite things if you can!”

“Baby I should go outsibe,” said Dudley. And before he knew it he had sneezed a hole right through the wall.

He crawled out the hole. “Achoo!” Yikes! His mother’s favorite thorn bush burst into flames.

He scorched a fleeing flock of crows. “Sorry!” he shouted.

“Achoo!” The drawbridge was toast.

Dudley spread his wings and took to the sky. Everyone below could see great tongues of shooting flame as he flew around in circles.

At last, when he felt all sneezed out, Dudley staggered back to earth.

“Here’s your soup, dear,” said his mom. “Isn’t it a good thing that dragon colds are short?”

Dudley ate his soup, got a good night’s sleep, and was back in school by the next day.

Dudley’s best friend Darius raised his hand. “I deed to go to the durse. I doad feel so good.”

Dudley backed away in a hurry.

And up in flames went Miss Dingle’s desk. 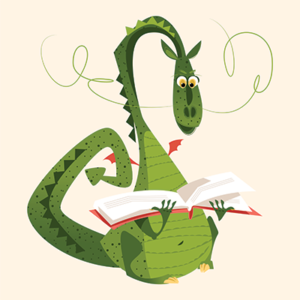