I’ve known Caroline Starr Rose for a long time – her talent, her generosity to other writers, her award-winning books, and her delightful self. Caroline has a new picture book out and it’s right up my alley. Historical nonfiction about two women? Racing around the world in the 1800s? Yes, please!

Here’s a synopsis of A RACE AROUND THE WORLD: 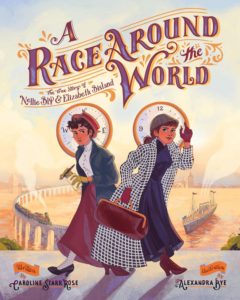 In the late 1800s, the world was enchanted with speed. Steamships raced across oceans, locomotives dashed across continents, and a famous novel by Jules Verne imagined a man circling the globe in only eighty days. A fearless New York reporter called Nellie Bly thought she could be faster. She set out on a ship heading east across the Atlantic and vowed to be back in seventy-five days! That same night, another New York reporter found herself on a speeding train to San Francisco. Her name was Elizabeth Bisland, and she’d just been given a most astonishing assignment: to travel around the world, going west, and to beat Nellie Bly. This is the true story of two remarkable women who didn’t just race around the world—they changed it.

Please tell readers how you came to discover this marvelous story about two remarkable women – one of whom is well-known but the other is new to this reader.

I grew up with a book about the one-of-a-kind, trailblazing journalist, Nellie Bly. In January 2017, I thought I’d try my hand at writing my own book about her. There are a number of children’s books about Nellie — she’s just that interesting. But only a couple focused exclusively on her most famous feat — an around-the-world trip that she hoped to complete in less than 80 days.

It was only in reading Matthew Goodman’s book, EIGHTY DAYS: NELLIE BLY AND ELIZABETH BISLAND’S HISTORY-MAKING RACE AROUND THE WORLD, that I learned Nellie had a competitor named Elizabeth Bisland. Like Nellie, Elizabeth was a journalist living in New York, but that’s where the similarities ended. Twenty-five year old Nellie was plucky and quick. Twenty-eight year old Elizabeth was thoughtful and reserved. Nellie relished the rhythm of newspaper work. Elizabeth preferred the steady pace of a monthly magazine. The more I read, the more fascinated I became with each woman’s story. I realized this was the focus I wanted my own book to take. 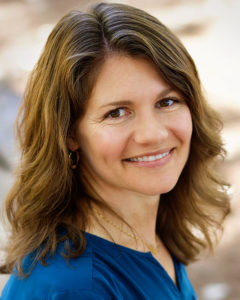 The illustrations are lovely and very detailed where it matters. Did you have input with the illustrator?

I’m not sure if it’s because my last two picture books have been historical or because I’ve worked with a publisher who always does it this way, but I’ve gotten to be quite involved in the illustrating process. I saw several sets of sketches and was able to make comments on a number of things, such as adding the map in the background of the picture of Nellie and Jules Verne (one of my favorite images), removing a sink and adding a basin and pitcher in Elizabeth’s steamer room, and contrasting Nellie’s one dark dress with a variety of colors for Elizabeth.

It was especially insightful to read the comments the art director left. She saw things I would have never imagined (like the angle the ship should take while riding a monsoon wave). It was fun to see in real time how the illustration process involves a series of drafts, just like the writing does.

Thursday, November 14 marks the 130th anniversary of the Nellie and Elizabeth’s race! Nellie traveled east from New Jersey by steamer that morning. Elizabeth left New York City that evening by train, traveling west. I would love to think young readers out there might be following along with Nellie and Elizabeth this Thursday.

You and I share a love of writing historical fiction/creative non-fiction. Please tell us what it is about writing history that appeals to you. And…what is hard about it.

As a child, history came alive to me through books. I want to offer the same opportunity for my readers. Historical fiction beckons us to step outside ourselves and enter worlds completely removed from our own. It asks us to be bigger than ourselves. I love that.

Many things are hard about writing historical fiction. It takes a lot of work upfront. I love research, but like it or not it’s an extra layer added to the making of a book. When writing about specific historical events (rather than “only” setting a story in a specific time and place in the past), it can be tempting to push characters through a historical gauntlet, rather than let the story organically unfold. Those events need to take place but in the context of the character’s life. The balance can be tricky!

What’s next on your writing desk?

Next up is a novel tentatively called MIRACULOUS. I call it history ultra lite, as it’s set sometime in the late 1800s in a midwestern state I never name. There is no historical event anchoring the story but a historical phenomenon from the era is at the heart of the story — the traveling medicine show.

Jack works as an assistant for a man named Dr. Kingsbury. He wholeheartedly believes in the mysterious doctor because his tonic saved Jack’s little sister. But things start to change for when the medicine show comes to a town called Oakdale. The story is told in five voices — Jack’s and four other Oakdale residents, including a girl named Cora who becomes Jack’s friend. 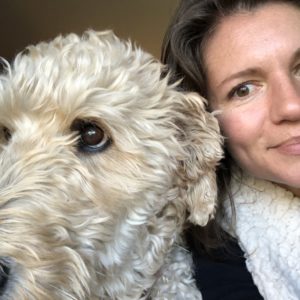 Caroline says: My goldendoodle is Boudreaux (Boo). This is the photo showing dog owners do indeed start to look like their dogs!

I know you have a dog – as a dog-lover myself (as are many of my readers) I’d love to hear a bit about your pup. And if you have any surprising tidbits about yourself!

My dog, Boudreaux, is a goldendoodle. We got her when we moved to Albuquerque nine years ago. Though my husband and I grew up here, the move from Louisiana was hard on our boys, and I promised a puppy to make things easier.

We thought the name Boudreaux would be a fun reminder of our Louisiana days. (It’s a common last name in Cajun Louisiana). Her nickname, Boo, is a Cajun term of endearment.

I’m the third “Starr” in my family. My grandmother was Gene Starr. My mom is Polly Starr. But as I don’t have any daughters to pass the name onto, our boys promptly decided Boo would be Boudreaux Starr Rose. It’s pretty much the sweetest thing ever.

Boo is my fuzzy writing companion. She’s often near as I work. Everyday we take a few walks together. These breaks are especially good when I’m stuck with my writing. How I love this girl!

Caroline Starr Rose is an award-winning middle grade and picture book author whose books have been ALA-ALSC Notable, Junior Library Guild, ABA New Voices, Kids’ Indie Next, Amazon’s Best Books of the Month for Kids, and Bank Street College of Education Best Books selections. In addition, her books have been nominated for almost two dozen state awards lists. In 2012 Caroline was named a Publishers Weekly Flying Start Author for her debut novel, May B. She spent her childhood in the deserts of Saudi Arabia and New Mexico and taught social studies and English in four different states. Caroline now lives with her family in New Mexico. You can find her online at www.carolinestarrrose.com Twitter Instagram