Who doesn’t like a haunted spot in October? I’m delighted to welcome Sally Keys to the blog today, to give us a spooky preview of scary places you can visit in Wyoming. Here’s a bit about Sally: “I spent over a decade working in web design before taking a step back to focus on home and family. These days, I work from home as a freelance writer. I love to spend as much time as possible exploring the great outdoors with my husband, two sons and our crazy but loving Labrador.”

Haunted Wyoming: The Top 5 Scariest Places That Will Keep You Awake at Night

Ghost tours have become all the rage over the past years, and some states have become famous for their haunted towns, houses, and cemeteries. If you’re ever in Wyoming and are looking for a good scare, you may find that there are lots of places to go to that will keep you wide awake at night.

From spooky haunted hiking destinations to a trading post teeming with ghosts, there’s always something in Wyoming that can give you that hair-raising adventure that you’re craving for. One of the most haunted places on this list is a famous national park that is said to have seen a lot of paranormal activity. Here are the top five scariest places in Wyoming that will keep you awake at night. 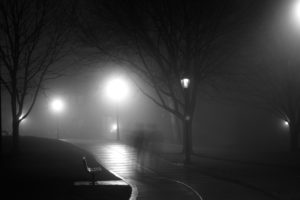 Photo by Jesse Bowser on Unsplash

This world famous park is one of the most premiere sites of ghost hauntings in Wyoming, and The Old Faithful Inn is known for housing a few entities. It has been said that Room Number 2 is haunted by the ghost of a woman dressed in 1890’s garb. There have also been eyewitnesses who claimed to have seen a headless bride in the establishment.

Reports of mysterious activity are rumored to have taken place in the inn. Doors are said to open and close on their own accord, and a fire extinguisher is claimed to have been turned upside down and back to its original position by an unseen force.

Fort Laramie was known for being a successful trading post back in the 1800s. The location, which is now a National Historic site, is said to be haunted by a spirit known in the area as the Lady in Green. Legend says that the ghost appears every seven years on the Oregon Trail wearing a green riding dress and a veiled hat. The ghost is said to be riding a black stallion and is holding a jeweled quirt.

Other ghosts in the site include one which regularly haunts the Captain’s Quarters and another that makes a lot of noise in the Cavalry Barracks. There are also sightings of a ghost of a surgeon wearing a blood-spattered uniform.

If you’re looking for another haunted destination that’s set in the great outdoors, then you must check out Cedar Mountain. It was once called Spirit Mountain as many people are said to have gotten lost in the caves. These as well as the canyon are said to be haunted, and footsteps have been heard by visitors.

The facility was built in 1872 and it used to house a variety of criminals such as the famous outlaw, Butch Cassidy. The prison was closed in 1903 and it has been converted into a museum and state park. You may get a glimpse of the ghost of Julius Greenwelch, who is said to be a convicted murderer who ran a cigar making operation from the prison. It has been claimed that the ghost’s appearance is almost always accompanied by the scent of cigar smoke.

This hotel is allegedly haunted by the ghosts of three people who were killed in a double murder-suicide. The housekeeping staff is said to have heard disembodied laughter and crying from one of the rooms, and witnesses report that they have had feelings of being watched. Entities have been seen wandering the second and fourth floors of the hotel, as well as its lobby.

If you’re in the mood for a good scare, check out any of these places in Wyoming. Bring your family and friends with you, and be sure to have a good time. While you’re at it, be on the lookout for ghosts too. You’ll never know who or what you may run into at any of these haunted destinations.