Anne Nesbet’s historical novel, CLOUD AND WALLFISH, about the Berlin Wall is receiving wide acclaim, including a Horn Book starred review. “In an intricately plotted novel full of espionage and intrigue, friendship and family, Anne Nesbet cracks history wide open and gets right to the heart of what it feels like to be an outsider in a world that’s impossible to understand.”

Anne wrote this post prior to last week’s election. If you feel a shiver up your spine, it may well reflect premonition. And another: November 9 is the anniversary of Kristallnacht. What is that, you ask? Only the beginning of the Holocaust.

Listen well. The past is teacher to the future. And we must, must pay attention, even to the smallest details. Here’s Anne.

As I finish up writing this post, it is already the early hours of November 8, 2016, a day for nervous humming and the biting of fingernails: a day when we know that tomorrow, the 9th, we will wake up, and the world will have changed a little. 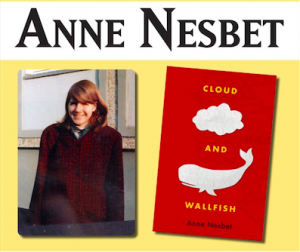 At least elections, like hurricanes and holidays, give some advance warning as they approach: we can prepare by studying the issues or boarding up the windows or baking a lot of cookies, as appropriate. But then there are all those other momentous changes that come without warning, like earthquakes or winning the lottery or–well, let’s go back to another November 8:

The headlines that day were very ordinary: Kitty Dukakis was in the hospital; the Fed had just eased credit; Del Monte was restructuring. In Europe change continued to simmer along: something like 60,000 East Germans had slipped into the West through the increasingly permeable borders of Czechoslovakia and Hungary since the beginning of November.

But it was really a very ordinary day.

All over East Germany, children pulled turtlenecks over their heads or buttoned up their shirts and had some breakfast (the brown bread had a lovely, comforting tang to it, and then there were the slices of cheese and sausage, and maybe some jam) while their parents drank coffee they had boiled on the stove, and then those children looked at the clocks on the walls and stuffed their school books into their backpacks and ran off down the stairs to school. Their parents probably worried about the state of their country at some point, about friends who were thinking of leaving somehow, or who had already left, or about the nervousness of politicians these days, while drinking their coffee–but then they put on their jackets and went to work at the lab, at the garage, at the office, another ordinary day in their ordinary world.

And then the very next day, after that most ordinary of Wednesdays, the Wall came down, and everything changed. 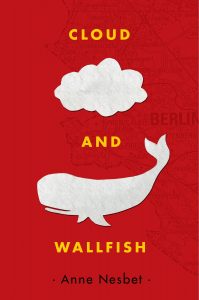 How do you tell a story that is true both to little things, like the taste of the bread people had for breakfast, and also to the huge events that interrupt the everyday and turn it into History? How do you respect both “November 8” and “November 9”?

CLOUD AND WALLFISH, my middle-grade friendship and spying novel, set in East Berlin in 1989, taught me that writing historical fiction is basically a question of choreography: shaping a dance between the Ordinary and the Extraordinary. There are the amazing historical events that really happened, that bring us to a place and a particular period in time: they dance like black holes, eager to swallow up the story. And then there are all the details of everyday life, the hopes and worries of ordinary people who have no way of knowing that today or tomorrow, their individual stories will find themselves caught up in a dance designed for a very large stage.

Noah and Cloud-Claudia, my heroes, get caught up in that large dance in Berlin; I want us to remember the little, everyday details as well as the splashy excitement of of the Wall’s collapse. For this reason, one of my own favorite parts of the book is where Claudia tells us more about something extraordinarily ordinary: a camping trip she went on with her parents, the previous summer. (If you read this aloud, be warned that you really have to try to do it all in one run-on breath!):

“‘I like to be asleep in a tent when it’s raining,’ she said. ….. “A tent is the best, if it isn’t leaking. If there are blankets and you have spent the whole day climbing up the crazy rock castles by the Elbe River and stopping to draw pictures of them because you can’t imagine how much they look like magicians carved them and then later you eat sausages and crawl into the tent and have the every-evening picture-judging contest to see who drew the best rocks that day which is not a fair contest says Papa, because his pictures are photographs so he can’t show them to us yet and ours always win, Mama’s drawings and mine, but that’s how it goes and you sing one more hiking song and then roll up in the blankets to sleep better and if then the rain comes but not all at once, just pat-pitter-pat like it’s whispering something, then that’s the best.'”

History has already hurt Claudia’s family, by this point in the story, but her life is not just History’s version: it is all the little things that came before. It’s the sound of the rain on the tent.

So my advice to those who find themselves suddenly caught up in History: notice the flavor of the bread. Write down some of the little details–maybe even do that today, which may also, who knows, turn out to be Historical: what socks you are wearing. How exactly you turn on the television, if you have one of those things. What the woman said at the store, when you were buying–what were you buying, again? You will be able to look up the big Historical aspects of today later on, but the little things are what make the difference between History and a life, and they deserve to be treasured, too.