This week I have a special treat for all you tricksters – and a special guest. Christine Hayes, author of MOTHMAN’S CURSE, has written us a tantalizing guest post – and she’s attached a great giveaway of her own! Here’s Christine:

There’s something irresistible about a mystery, and cryptids may be one of the most tantalizing mysteries of all. Cryptozoology is the study of creatures that haven’t been proven to exist. The most famous of these include Bigfoot and the Loch Ness Monster. People have tried for decades to secure proof of these fascinating figures, but most of the photos that surface turn out to be fakes. 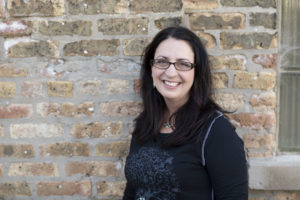 So are they real? Some believe that cryptids are afraid of humans—just as we’re afraid of monsters. Or perhaps they’ve learned to stay in hiding in order to survive. But fifty years ago, one creature broke with tradition and started appearing all over town in Point Pleasant, West Virginia.

It began in November of 1966. Two couples were driving down a dark country road when something began chasing them. They described the being as shaped like a man, with wings and glowing red eyes. The story made the papers the next day. The creature came to be known as Mothman.

Enthusiasts flocked to Point Pleasant, hoping for a glimpse of Mothman. More than a hundred sightings were reported over the next 13 months. And then, disaster struck.

The Silver Bridge, which connected Kanauga, Ohio and Point Pleasant, collapsed during rush hour traffic. Forty-six people were killed. In the years to come, legend grew that the tragedy and the Mothman sightings were connected. Did Mothman cause the collapse? Was he trying to warn the town? Either way, his reputation as an omen of disaster has endured.

Many cryptids are not well-known outside their regional haunts, and Mothman is no exception. So when I began writing MOTHMAN’S CURSE, I had a lot of room to play—creating a backstory and widening his sphere of influence. I wanted to explore what would happen if Mothman appeared in other towns, where other disasters loomed. And I loved the idea of two brave kids facing down this huge, frightening creature and saving their town in the process.

October is the perfect month to explore spooky folklore and urban legends. Dusk creeps in a little earlier each day; bare branches scrape at the sky like grasping fingers. And Halloween beckons, a promise of imagination untamed. I recommend curling up with a good book, a warm pair of socks, and an apple cider donut or two.

But should you decide to go cryptid hunting, be sure to take your camera.

31 DAYS OF SCARES AND SHARES: A giveaway to celebrate the release of MOTHMAN’S CURSE in paperback!

Winners will be announced Tuesday, November 1.

Enter Christine’s giveaway if you dare!!

And don’t forget……………..the Rafflecopter giveaway of THE CHARMED CHILDREN OF ROOKSKILL CASTLE is still on. Find out more about that giveaway here.