Beneath my fingers, the ground was alive. It rumbled, creaked, and groaned – with each spray, the earth heaved. And as I sat there helpless and trembling myself, I began to sense the rhythm of it, just as the sea had a rhythm that I knew. I geyser roared and ebbed and roared again, like the ebb and flow of tides. I pressed my hand onto the ground and felt it shudder. 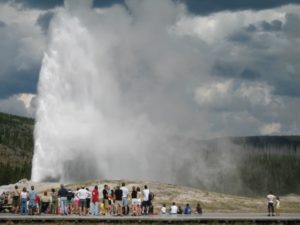 I cringed as another jet of water shot skyward, but the water caught the sun. It glittered and sparkled like a million diamonds, while the air roared and the ground trembled, and then the magic of Yellowstone caught me, and I was lost to it forever. (FAITHFUL, page 185)

My protagonist Maggie in FAITHFUL, like other early tourists in the Park, were struck by both the beauty and the deadly power of Yellowstone National Park. They nicknamed the Park “Wonderland” mostly for its many thermal features and variegated-color rock formations. With more than 10,000 thermal features, Yellowstone contains the world’s largest concentration of geysers, hot springs, steam vents, and mud pots. The reason for all this geologic activity and the varied rock types is that Yellowstone sits atop a giant volcano. 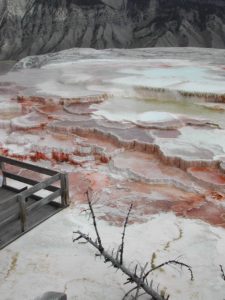 Beneath Yellowstone is a large magma chamber, which lies at a level shallow enough that scientists consider Yellowstone to be an active super volcano, which is the surface expression of a hotspot. Periodically, the volcano erupts; the last time the volcano erupted it erupted explosively, creating the caldera which now forms the rims of cliffs within the Park.

Cracks and fissures in the earth’s crust allow water from rain and snow melt to penetrate to the hot rock below. This water is super heated and returned to the surface, creating the geologic features like the geysers and hot springs. The white sinter that forms at the surface around geysers and in areas like Mammoth is precipitated silica that dissolved in the water as it traveled back up through these natural plumbing systems. 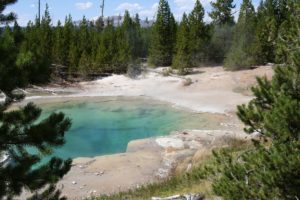 While the last major eruption of the volcano was 640,000 years ago, as recently as 70,000 years ago Yellowstone volcano experienced minor eruptions and lava flows. And while the volcano is almost certain to erupt again one day, there is no indication at the moment that this will happen in the near future in human terms. Scientists constantly monitor the many small earthquakes and changes in Yellowstone.

Rather than fearing the volcano, Maggie – and we – can appreciate the beauty and power of this remarkable natural feature, the like of which is found in only a few places on earth.

Check out my previous post on the “wild” west; this is the final post in my Yellowstone series.

2 Responses to “FAITHFUL and the Yellowstone Volcano”