As you saw in my previous post, Enrico Caruso experienced a devastating earthquake.

At 5:12 on the morning of April 18, 1906, San Francisco was rocked by an earthquake estimated now to have been of magnitude 7.8 (the Richter scale was yet to be instituted; this magnitude is the same as the recent initial Tibetan earthquake.) While the main epicenter of the quake was offshore, it is assumed to have been associated with the San Andreas Fault, a strike-slip boundary. There were two jolts, a foreshock of about 25 seconds and the main shock, which lasted a devastating 42 seconds. 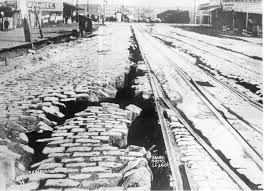 It must have felt like it went on forever.

The initial death toll was reported in the hundreds, but that was partly due to under-reported fatalities in crowded Chinatown; it’s now assumed that thousands died in the initial quake.

Areas north of San Francisco, like Santa Rosa, were hit even harder, and the Salinas River was permanently shifted to a new channel, emptying six miles south of its previous course. 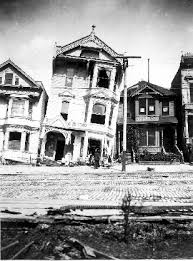 Here is one eyewitness account of the initial devastation:

“Of a sudden we had found ourselves staggering and reeling. It was as if the earth was slipping gently from under our feet. Then came the sickening swaying of the earth that threw us flat upon our faces. We struggled in the street. We could not get on our feet. Then it seemed as though my head were split with the roar that crashed into my ears. Big buildings were crumbling as one might crush a biscuit in one’s hand. Ahead of me a great cornice crushed a man as if he were a maggot – a laborer in overalls on his way to the Union Iron Works with a dinner pail on his arm.” (P. Barrett).

As terrible as the quake itself was, what happened in the days following the quake left hundreds of thousands of residents homeless, and changed the face of San Francisco forever.