One of my closest friends from my time at Vermont College of Fine Arts is author Anne Bustard, so I’m especially thrilled that her debut novel ANYWHERE BUT PARADISE is out today. Even more especially since Anne’s novel was bought by Egmont, and she was one of the orphaned authors of their “Last List”. (Luckily, Lerner Group has acquired Egmont’s titles, including Anne’s.) I’m even more especially thrilled because I saw early drafts of this novel – and I can tell you it’s wonderful.

Anne agreed to come over and write a very wise guest post for me, so here she is.

Pressing DELETE may be the answer, by Anne Bustard

I love to watch outtakes of movies. I’m fascinated by what didn’t survive. Usually I agree with the cuts, but sometimes I like one so much, I wish the filmmaker had kept it anyway. Just because. 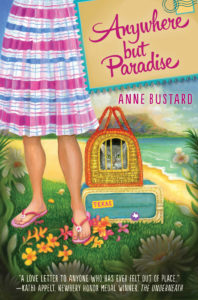 So, it may not surprise you that superfluous favorites have remained in draft after draft of stories of mine because of love. In my critique group, we call it “ice skating.” (More about why in a moment.) What I have come to realize is, the Delete key can be a writers’ best friend. Pressing it may, in fact, save your story.

Twice, I hit Delete on an entire manuscript. And survived. It is now my debut novel.

Based on my experience, I have a few tips. 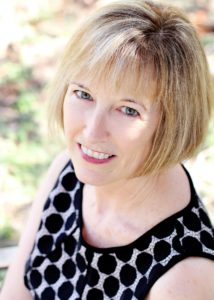 During a major revision to short chapters and fewer threads for Anywhere but Paradise, I came up with a sparkly new thread—I loved it so. It was all about Peggy Sue’s desire to be an Olympic ice skater. I showed how the move to Hawaii crushed her dream because there were no ice rinks in the islands. I concocted, through much research, a traveling ice show.

My critique group ever so tactfully suggested that I might think about thinking of ditching that thread because it didn’t add anything to the story.

After much angst, I nixed those chapters and scenes. But only the day before I queried agents. I did not want to cut them. I loved them. But cut I did, because, I thought—I can always add them back in.

I never did. And now I can’t imagine what I’d been thinking.

Okay, so there might be one teeny, tiny line related to that thread that remains. I promised myself if my wonderful editor questioned it—it was a goner. She didn’t.

The line occurs early in the story. Peggy Sue is at her first hula lesson. She realizes that dancing is harder than it looks.

Practice. All I need to do is practice.

All day every day.

Like me, you may not need ice skating in your manuscript. Embrace the delete option. Many possibilities glitter and shine, but only choose those that best serve the novel.

You can find out more about Anne and her work here.