Jazz was a strong cultural influence on the twenties. Here’s another:

Gatsby: The Novel That Gave Us Flappers

When I began writing SIRENS I immediately re-read one of my favorite books: F. Scott Fitzgerald’s THE GREAT GATSBY. It is an iconic vision of the 1920s.

Scott Fitzgerald, aspiring writer, met Zelda Sayre, a southern belle and his future wife, in 1918. She was a beauty and she was fearless and spontaneous, and he was the shy writer – he succeeded in persuading her to marry him only when his success was assured. Once together, they became as famous for their wild ways as for their fame, itself.

Fitzgerald’s novel The Great Gatsby was published in 1925. He considered it his masterpiece (as do critics of American literature today) but at the time, although it received good reviews, it did not sell as well as his previous work. As a portrayal of “old” money versus “new” money on Long Island, Gatsby was also an exploration of the mores of the time, the post-war transition, and especially of the behavior of the characters and of love unrequited. 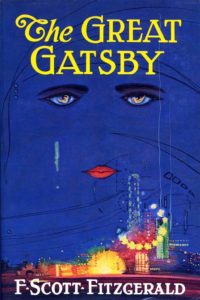 Perhaps most importantly for readers of the 1920s, however, was that all of Fitzgerald’s novels give such an evocative portrait of the true flapper that Fitzgerald was widely regarded as having “invented” the idealized flapper. The girls in his second novel, the successful The Beautiful and the Damned, were said to have been modeled after Zelda, whose reckless and abandoned behavior (drinking all night, partying all day) made her infamous. She also consorted with other men, flaunting her behavior in public. By the time Gatsby came out, the Fitzgerald marriage was rocky at best.

While Gatsby sales were disappointing, with its publication Fitzgerald suddenly found himself in stellar company: Picasso, James Joyce, Cole Porter, Isadora Duncan. Scott’s and Zelda’s reckless behavior escalated. Drunken parties, property destruction, bar fights – taking place abroad, as the couple had migrated to France – undermined their fragile marriage further. By the end of the decade, Zelda was diagnosed with schizophrenia, Scott was an alcoholic, and by the mid 1930s they were estranged.

The great irony of Gatsby is how much of the Fitzgeralds’ personal life seems to be reflected in its pages. Excessive behavior, betrayal, and heart-breaking love lost – these are Gatsby’s themes, just as they are the Fitzgeralds’. Gatsby himself is desperately seeking his moral center, and Daisy seems not to have one at all.

Perhaps this echo of life within art is what makes The Great Gatsby such an affecting novel. It’s not only a superb portrayal of the 1920s and of flapper behavior; it’s also a poignant window i

(Fun fact: check closely the original novel cover art, and look at the eyes of the girl on the cover. They aren’t what they seem at first.)

Have you seen the Gatsby movie? If so, what did you think?

I hope you enjoyed the entire 1920s series of posts, which you can find under my SIRENS History category.