In my last post I referenced Prohibition. Here’s what it meant:

In SIRENS, Jo Winter’s father is a bootlegger, a middle man for the sale of alcohol. That gets him into big trouble because it means he’s doing something illegal in 1925; and worse yet, he may be hiding something from the gangster he sells to, Danny Connor. Pops’ bad decisions pull Jo and her brother Teddy into the deadly world of gangsters and 1920s violence. 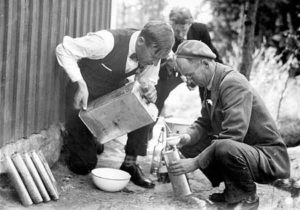 When in January 1920 the 18th Amendment to the Constitution took effect it prohibited the manufacture, transport and sale of alcohol in America. (Not the purchase or consumption of alcohol – that’s important to note.) Prohibition supporters claimed it would create a society that was sober and therefore patriotic and prosperous. No more corruption, lazy workers, or violence.

Instead, almost overnight as alcohol became illegal, people searched for new and sometimes dangerous ways to find a drink. The romantic allure of something forbidden gave rise to a glamorous depiction of mixed drinks and drinking in general.

Al Capone and other gangsters became efficient at transporting alcohol, which resulted in turf wars and deadly raids. Home distillers brewed up alcohol – dubbed “moonshine” – from almost anything, including toxic substances. And “speakeasies” – so called because you were encouraged to speak softly – sprang up all over the country.

Some clever entrepreneurs created bars known as “blind pigs,” where a patron could pay to view a blind pig (what a thrill!) and, oh, by the way, consume a “free” alcoholic beverage (remember, it wasn’t illegal to purchase or consume, just to sell.) Others created fancy jazz joints behind closed doors where admission was only gained by knowing the correct password.

Prohibition of alcohol made it romantic, glamorous, and exciting to drink. Some speakeasies were elaborate constructions. One New York speakeasy went by the name “County Fair,” and was pretty much a set decoration: it was made to look like a fairground, complete with a white picket fence and grandstand boxes for booths.

The exploits of the flappers and the gents who frequented speakeasies were documented by a New Yorker columnist who went by the pseudonym “Lipstick,” and who made speakeasies and their patrons sound enthralling. Lipstick was actually the writer Lois Long, and she was good at

her undercover job because she was the quintessential flapper: tall and thin, bob-haired, attractive, and dressed for the job.

Corruption among police and other officials was rampant, mostly because their salaries were so low they were easily tempted by cash offered by the bootleggers. When they did bust a gin joint, they let the patrons go and gave the owners a slap on the wrist, and (after exacting a donation to the “Policeman’s Benefit Fund”) the place would be back in business the next night. 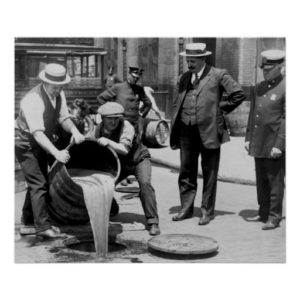 One of the main things that made the 1920s the “Roaring” decade was Prohibition. One of the others was the emergence of the liberated young woman. Lois “Lipstick” Long was the epitome of the modern young woman who went to speakeasies and stood toe to toe with the men around her, drinking alcohol as much as they did and staying out all night. Would she have emerged without Prohibition? What do you think?

2 Responses to “The “Roaring Twenties” You May Not Know: Post Five – Prohibition”