Last post I talked about Prohibition. Here we see the result:

Danny Connor, in SIRENS, is a gangster. Lou is his moll, or girlfriend. While both are fictional characters, I could envision that when the very real Al Capone left New York for Chicago in 1921, someone had to fill the void, so I made up Danny. He’s not a nice man. Gangsters are not nice men. 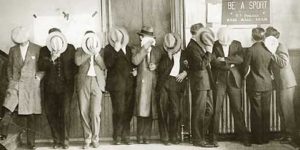 Gangsters really can’t get a foothold unless they can offer something everyone wants but nobody can get legally. In the 1920s, that something was alcohol.

Let’s face it: Prohibition was a bad idea. It glamorized alcohol by prohibiting it. Gangsters like Al Capone – already involved with other criminal activities – saw the opportunity to provide the people with what they wanted, and “rum-running” or “bootlegging” was at the top of the list.

Al Capone was the most notorious of the 1920s’ underworld mobsters. Tough and determined, he ro 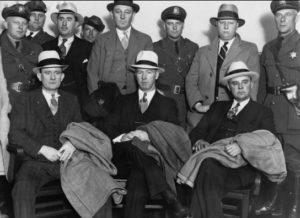 se to the top by his intelligence and by his determination to rise above his poor immigrant upbringing, both fueled by his brutality. Mobsters in general were society’s outcasts, and as the son of immigrant Italians, Capone couldn’t find success in legitimate enterprises. He turned instead to the underworld: gambling, theft, corruption, gun-running, and alcohol.

Girlfriends of gangsters were known as their “molls.” A penniless girl didn’t have many choices in the 1920s – women were only just beginning to break into the job market – and being a rich man’s girlfriend sure made life easier.

Gin joints – speakeasies – were a product of the prohibition of alcohol. Sure, speakeasies could be fun places – joints like “21” with its upscale décor, joints in Harlem featuring great jazz, or the “Nineteenth Hole Club,” made to look like a golf

course – were swanky, happening places. Dancing, smoking, and drinking were extolled in the society columns of writers like “Lipstick”. A girl who couldn’t find a glamorous job, like that of a secretary? She could earn an ok wage as a factory girl, sewing machine operator or domestic servant, but how could she afford to buy the clothes she needed for work and the clothes she wanted for play, plus all the other extras?

The life of a gun moll must have been very tempting.

But short. Bonnie and Clyde were gun moll and gangster, and they came to a pretty rough end. Most did.

Even Al Capone paid, although not until 1931. He was finally carted off to prison but not for murder or racketeering or any

of the other myriad activities he’d engaged in, but, ironically, for evading taxes on his illegal profits. It was all the violence around him that really brought him down, culminating in the Saint Valentine’s Day Massacre of 1929, when the public finally turned against him and the cops could no longer look the other way. (Although it must be said that no one was ever brought to trial for that crime, including Big Al.)

The Roaring Twenties had a bright side and a dark side. Bright were the changes that brought new style, new music, new ideas to society. Dark was the greed and criminality that fed off of Prohibition. It’s important that we recognize both.

In my next post, another dark side of the Twenties.

One Response to “The “Roaring Twenties” You May Not Know: Post 6 – Gangsters”