As a follow-up to my research on SIRENS (Penguin, 2012) I wrote a series of ten articles that summarize different aspects of the 1920s. Over the next few weeks, I’ll be posting them here so that they’ll be available in my archives. Here’s the first in the series…

Home From World War 1: Returning From the “Great War”

In SIRENS, Jo Winter’s most pressing internal problem is the whereabouts of her missing older brother, Teddy. He returned from his stint in World War 1 damaged by “shell-shock.” Here’s a bit about what that means:

The end of the First World War in 1918 was a time of great social and economic transition that led directly to what made the 1920’s “The Roaring Twenties.” 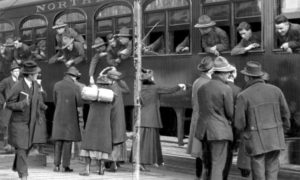 And while these physical traumas were terrible, the internal traumas may have been far worse. PTSD – post-traumatic stress disorder – isn’t a new thing. Called “shell-shock” at the time of the Great War, the damage inflicted psychologically on soldiers servi

ng in the war was unanticipated. Men in the 1900s were expected to be “masculine” and repress their emotions. Crying and breaking down were behaviors thought unacceptable, and were often cited as reasons for placement in insane asylums. Doctors, and the public, had no way to understand the experiences of these soldiers, and they were treated indifferently at best and punished for their behavior at worst.

The end of the war for these returning soldiers could not mean a return to “business as usual”, even if th 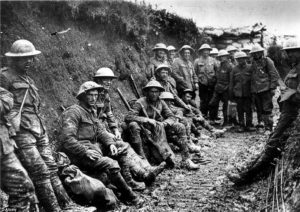 at had been the hope. Technological advancements, urbanization, and immigration led directly to the social upheavals of the 1920s. With so many men serving, killed in action, or returning disabled in body and mind, women had been needed in the work force, and they were reluctant to return to domestic situations, which served to strengthen the cause of women’s suffrage and independence. This independence was evidenced by the adoption of less restrictive clothing and shorter skirts and the fad for shorter hair that was easier to manage.

Movements like pacifism, isolationism, and spiritualism grew following the end of the war as people sought to retreat from the horror. And the need for relief from the emotional traumas of the war may have contributed to the “anything goes” atmosphere that prevailed in the 1920s. Advertising, commercial manufacturing, the rise of the cinema, and the automobile promoted “new” and “more liberal” ideas that conflicted with the traditional thinking American soldiers left behind when then went off to fight.

Any war impacts the generation th 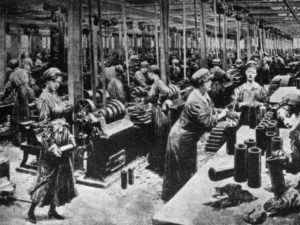 at lives it and the decade that follows it, but the changes in society following World War 1 were rapid and extreme. It would have been a tough homecoming for those soldiers.

(Check out the fashions in the Downton Abbey image. The designers of that show have it right. Austere, severe, and probably uncomfortable.)

In my next post, what happened when women got the vote.